Since the late 1960s, geologists working in the Illinois Basin have recognized that deposits of thick coal having a relatively low sulfur content (less than 2%) are associated with thick, nonmarine gray mudstone and siltstone overlying the coal. Moreover, these thick, gray sediments are associated with paleochannels that existed during peat formation. Channels contemporaneous with the Herrin and Springfield Coals, the two most important economic seams in the basin, have been identified and mapped in detail. Similar relationships involving the Murphysboro, Colchester, Baker, and Danville Coals also have been documented (Treworgy and Jacobson 1979).

Previous authors have explained these relationships by using a model based on the modern Mississippi delta. They envisioned a channel that periodically broke through its natural levees and discharged sediment-laden water into flanking peat swamps. Resulting “crevasse splays” created clastic “splits” within the peat along the channel margins. However, no natural levees have been found along the paleochannels, significant evidence exists for tidal sedimentation, and further research has shown that the Mississippi delta is probably not a good analogue for Pennsylvanian coal deposits. Hence, the model is in need of revision.

This study describes and explains the Galatia channel, one of the best-known examples of a paleochannel contemporaneous with peat accumulation. Such paleochannels yield key insights into the ways eustasy and climate influence sedimentation, and they add complexity to generalized models of cyclic sedimentation. A new model is presented here, which takes in the complete history of development of the Galatia channel and the landscapes of which it was a part. This model is then applied to other paleochannels in the Illinois Basin, and likely can be applied in other basins.

The Illinois Basin, also called the Eastern Interior Basin, covers much of Illinois along with southwestern Indiana and part of western Kentucky in the east-central United States (Figure 1). The Illinois Basin is an interior cratonic basin that developed progressively throughout Paleozoic time (Leighton et al. 1991). During the Pennsylvanian Period, widespread tectonic deformation took place in the Illinois Basin in response to the ancestral Rocky Mountain Orogeny (McBride and Nelson 1998) and perhaps flexural interactions with the Allegheny Orogeny (Quinlan and Beaumont 1984). In Illinois, the La Salle Anticlinorium, Du Quoin Monocline, Salem and Louden Anticlines, and numerous smaller structures all were active during the Pennsylvanian. In fact, the Springfield Coal thins where it crosses the Louden Anticline and southern part of the La Salle Anticlinorium (Plate 1), evidence that these structures were rising during peat accumulation. 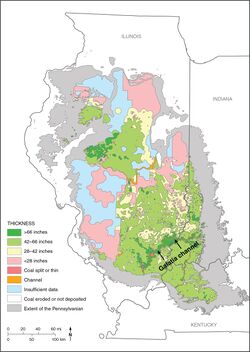 Figure 1 Map of the Illinois Basin, showing the extent of Pennsylvanian rocks, thickness of the Springfield Coal, and channels interrupting the coal. From Finley et al. (2005). 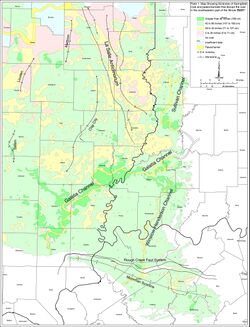 Plate 1 Map of the southeastern part of the Illinois Basin showing the thickness of the Springfield Coal, channels that affect the coal, and major structural features

On a global scale, assembly of the supercontinent of Pangaea was well underway by the Middle Pennsylvanian. Southwest of the Illinois Basin, plate collision had closed off the Arkoma Basin, and the Ouachita Mountains were rising (Houseknecht 1983). Tectonic activity was widespread throughout the Midcontinent, including the Illinois Basin (McBride and Nelson 1998). Plate reconstructions show the Illinois Basin close to, or slightly south of, the equator (Scotese 2010; Blakey 2011).

The Springfield Coal Member[footnote 1] of the Carbondale Formation is of late Desmoinesian age (Figure 2), which is equivalent to Asturian (Westphalian D) of Western Europe and to late Moscovian on the global time scale (Davydov et al. 2012). It is informally known as No. 5 Coal in Illinois, Coal V in Indiana, and No. 9 Coal in western Kentucky. The Springfield is correlative with the Summit Coal of the Western Interior Basin and with the Middle Kittanning coal bed of the northern Appalachian Basin on the basis of physical stratigraphy (Wanless 1939), palynology of coal (Peppers 1996), and conodonts (Heckel 2009) and ammonoids (Work et al. 2009) in associated marine rocks. 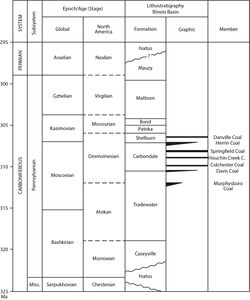 Figure 2 Correlation chart showing position of key units within the Pennsylvanian Subsystem. Global and provincial stage boundaries and ages in millions of years (Ma) are from Gradstein et al. (2012)

The Springfield accounts for about 29% of remaining identified Illinois Basin resources and has been the most extensively mined coal seam in the Illinois Basin (Hatch and Affolter 2002). The coal is high-volatile bituminous in rank and generally is bright-banded, having well-developed cleat and lacking significant clastic partings. Thickness varies from about 3.9 to 4.9 ft (1.2 to 1.5 m) in most areas where the coal has been mined. Thicker coal, locally exceeding 9.8 ft (3 m), is confined to the flanks of the Galatia channel.

With their eyes on industrial development, the scientists who made the first geological surveys of Illinois, Indiana, and Kentucky paid special attention to coal deposits. David Dale Owen first described what is now called the Springfield Coal in Indiana (1839) and in Kentucky (1856); Amos Worthen did the same in Illinois (1870). Gilbert H. Cady (1919, p. 21) may have been the first to remark on “a sandstone which occupies what seems to have been a channel running southward through the central part of [Saline County, Illinois]. . . . This channel was apparently formed and filled before the deposition of No. 6 Coal and probably during or after the deposition of No. 5 coal”. The extent of the channel north of Saline County in Illinois remained little known because the greater depth of the coal deterred mining. Over the next 50 years, other authors briefly remarked on aspects of what came to be known as the Galatia channel. Mining companies coped with channel-related features and recorded them on their maps. But until 1968, these features were known only as isolated phenomena.

Hopkins presented little geologic interpretation, aside from proposing that the channel existed during peat formation and that rapid burial by nonmarine gray mud (Dykersburg) shielded the peat from sulfur-bearing marine water and sediments.

In Indiana, Donald L. Eggert (1978) was the first to recognize paleochannels contemporaneous with the Springfield Coal. A series of follow-up papers and reports (Eggert 1982, 1984, 1994; Eggert and Adams 1985) described the Galatia channel and related features in Gibson, Pike, and Warrick Counties. Together, these articles described relationships closely similar to those developed in Illinois and they relied on the same interpretive crevasse-splay model.

Models applying modern deltaic processes to ancient rocks (e.g., Morgan and Shaver 1970) were in vogue when the Galatia channel was first recognized. Being close at hand and thoroughly investigated, the Mississippi delta commanded the attention of American geologists. Explicitly or otherwise, authors had the Mississippi delta in mind as they explained coal-contemporaneous channels in the Illinois Basin. Leading the way were Johnson (1972) and Hopkins and Allgaier (1975). The latter (p. 14) stated, “The characteristic pattern of these shales [Energy and Dykersburg] and their association with coal and channels suggests a depositional model whereby floods causing breaks in levees along the banks of channels, which ran through the coal swamp, resulted in crevasse splays of gray shale wedges over coal (peat) deposits . . .”. Hopkins et al. (1979) referred to the Dykersburg and Energy Shales as crevasse-splay deposits derived from those channels. Summarizing earlier work, Nelson (1983, Figure 8) illustrated Galatia channel environments including levees, crevasse splays, and a bird-foot delta like that of the Mississippi (Figure 3). Nelson (1987, p. 12–14) departed slightly from previous scenarios, noting the lack of evidence for natural levees, while continuing to place the coal and shale deposits within an overall deltaic setting. Similarly, Burk et al. (1987) continued to interpret the origin of the Energy Shale in terms of deltaic crevasse splays. 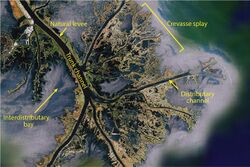 Eggert (1982) and Eggert and Adams (1985) also explicitly related channel development in Indiana to the modern Mississippi delta. They envisioned the Galatia and associated channels as deltaic distributaries, flanked by natural levees that frequently failed, spilling sediment-laden water into adjoining peat swamps. Eggert (1994, p. 14) regarded the Galatia channel as part of a delta that prograded seaward during peat deposition and (p. 16) alluded to the Dykersburg Shale as lacustrine and overbank mud.

Archer and Kvale (1993) and Archer et al. (1994, 1995) represent the first major departure from the deltaic model in the Illinois Basin. These authors recognized rhythmic lamination and other tidal signatures in Illinois gray shale associated with low-sulfur coal. Thus, they placed deposits such as the Dykersburg Shale into estuarine environments rather than fluvially dominated deltas.

The Illinois Basin is the birthplace of the cyclothem. Udden (1912) recognized four cycles of deposition in Middle Pennsylvanian rocks near Peoria, Illinois; the oldest cycle included Coal No. 5 [Springfield]. Weller (1930) introduced “cyclical formations”; Wanless and Weller (1932) coined the term “cyclothem” based mainly on work in western Illinois. By this time, other workers recognized Pennsylvanian cycles elsewhere in the United States. Among the driving mechanisms suggested were interrupted subsidence, tectonic movements, and autogenic processes such as channel avulsion and delta switching (Langenheim and Nelson 1992). Wanless and Shepard (1935, 1936) were the first to propose glacially driven eustatic changes of sea level as the driving process.

Sequence stratigraphy came into use within the oil industry in the 1970s and reached the broader geologic community with American Association of Petroleum Geologists’ Memoir 26 (Payton 1977). However, Sloss et al. (1949), who worked in Illinois, are acknowledged as pioneers. Basically, a sequence is an updated version of the cyclothem, with glacial eustasy viewed as the primary causative mechanism. A sequence is “a relatively conformable succession of genetically related strata bounded at its top and base by unconformities or their correlative conformities” (Mitchum 1977, p. 210) and represents a single cycle of sea-level rise and fall. Modern sequence stratigraphers recognize as many as five orders or levels of cyclicity and relate them to periodic changes in Earth’s climate caused by astronomical processes.

In the past 40 years, sequence stratigraphers have generated an immense amount of literature accompanied by a maze of terminology. A brief review reveals that different authors apply some of the same terms with different meanings. Ironically, sequence stratigraphy has yet to see much usage in its original homeland, the Illinois Basin. Full application of sequence concepts to Pennsylvanian rocks in this basin is beyond the scope of this report. Nevertheless, we wish to discuss rocks related to the Springfield Coal and Galatia channel in terms of their interpreted position in eustatic cycles. To avoid misunderstanding, we are using terms in the following fashion: