The name refers to a hill just southwest of Mulberry, close to the Missouri border in Crawford County, Kansas.

Usage of the term Breezy Hill in the Midcontinent has remained stable. Inden (1968) introduced the unit into Illinois in a thesis; the first published usage here was by Nance (1970). 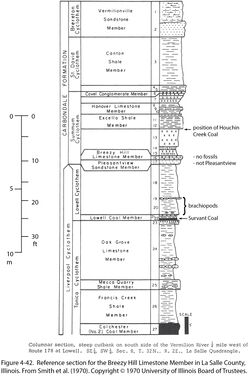 According to Pierce and Courtier (1938, chart, p. 18), the Breezy Hill Member lies directly below the underclay of the Fort Scott (Mulky) Coal and approximately 80 ft (24 m) above the Bevier Coal. Later authors followed this usage in Kansas (Howe 1956; Zeller 1968; Heckel 2013). Likewise, in Missouri, the Breezy Hill resides directly below the Mulky underclay and is separated from the Bevier Coal by a thick succession of shale and sandstone now called the Lagonda Formation (Howe and Koenig 1961; Gentile and Thompson 2004). The Breezy Hill has not been recognized in Iowa (Ravn et al. 1984; Pope 2012).


The limestone identified as Breezy Hill in Illinois resides at the same position as the Breezy Hill of Kansas and Missouri and therefore is accepted in the present report. The Breezy Hill should not be confused with fossiliferous limestone that is locally present near the base of the Lagonda Member. 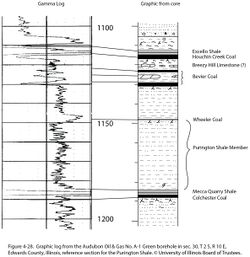 In Illinois, the Breezy Hill is discontinuous and rarely exceeds about 1 ft (30 cm) thick. Reported occurrences are in northern and western Illinois, including Fulton, LaSalle, and Peoria Counties. Inden (1968) reported two outcrops of bedded to massive limestone as thick as 9 ft (2.7 m), both overlying channels filled with Pleasantview Sandstone. The Breezy Hill may occur more widely (albeit sporadically) in the basin but has been given scant attention. In a core from Edwards County in southern Illinois (Figure 4-28), the Breezy Hill is argillaceous, nodular, micritic, unfossiliferous limestone about 0.6 ft (18 cm) thick.

No detailed information is available. The unit commonly consists of lenses or nodules of limestone in a claystone matrix, yielding a highly irregular interface.

No logs that illustrate this unit are known.

In Kansas, the Breezy Hill contains brachiopods and foraminifera, including fusulinids (Howe 1956) and sparse conodonts (Heckel 2013). Nearly all the bioclasts examined by Inden (1968) were algal stromatolites, genus undetermined. One thin section revealed ostracods and a single gastropod.

Fusulinids and conodonts are reported to occur in Kansas but have not been studied. Correlatives outside the Illinois and Midcontinent Basins have not been identified.

The Breezy Hill carries a marine fauna in the Midcontinent and is regarded as the transgressive to highstand portion of a minor cyclothem. In places, the upper part of the limestone is “heavily pedogenized” (Heckel 2013). Inden (1968) interpreted the Breezy Hill of Illinois as deposits of freshwater lakes or ponds on a delta plain or floodplain. The rock texture, presence of algae and peloids, virtual absence of other fossils, and association with underclay support this interpretation. Nance (1970) concurred. Inden (1968) envisioned a regional transition from freshwater in Illinois through brackish or marginal marine in Missouri to fully marine in Kansas and Oklahoma. Heckel (2013, text figure 7) charted the Breezy Hill as a minor marine incursion.