Cady (1915) referred informally to the “big vein” or “Cardiff coal” mined underground at Cardiff in northeastern Livingston County, Illinois. With a map and cross sections, Cady illustrated how the coal lies in a “small, channel-like basin” shaped like a crescent and 1,000 to 1,200 ft (300 to 360 m) wide. Peppers (1970) formally identified the unit as the Cardiff Coal Member.

Cardiff, Illinois, was settled by coal miners from Wales and named for the Welsh city that formerly was a major coal-mining center (Callary 2009).

Mining people knew this seam as the “big vein.”

None. Mines that extracted this coal have been sealed or backfilled. Numerous drill-hole records exist, but only drillers’ logs are available. 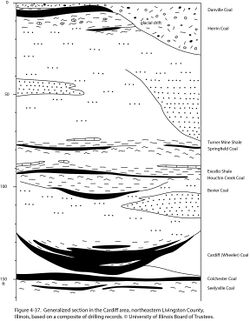 Figure 4-37. Generalized section in the Cardiff area, northeastern Livingston County, Illinois, based on a composite of drilling records. © University of Illinois Board of Trustees.

As Cady (1915) recognized, the Cardiff coal, like the Kerton Creek coal bed and Roodhouse coal bed, is a highly localized deposit filling channels that locally cut into the Colchester Coal. Peppers (1970, p. 49) concluded that the Cardiff is “an earlier abandoned channel phase of deposition of the Lowell [Survant] Coal” that may be slightly older than the Survant elsewhere in the basin, based on its spore composition. Willman et al. (1975) did not elucidate, but their chart shows the Cardiff as a lentil of coal near the base of the Francis Creek Shale. Jacobson (1985, figure 4) illustrated the same relationship. Although Baird et al. (1985b) did not discuss the Cardiff coal, they presented a schematic representation of the “Mazonian delta complex” (their figure 15) showing what appears to be thick peat filling an abandoned distributary channel within the Francis Creek Shale.


A generalized columnar section of the Cardiff area (Figure 4-37) is based on drilling records from the Cardiff Coal Company, circa 1989–1902. These records may have been based on cores because thicknesses are stated to the inch, but they read like drillers’ logs and use quaint terminology, such as “soapstone” and “coal stone.” Accordingly, a fair amount is left to the imagination. My correlations agree with those of Jacobson (1985, plate 5) but differ from those of Smith (1970), who identified the coal at the top of the column as the Summum (Houchin Creek). I interpret the Cardiff coal to be overthickened Wheeler (lower Survant) coal that partially filled a channel incised into the Purington and Francis Creek Members during a brief eustatic lowstand. The Cardiff is partly correlative to the Kerton Creek, Roodhouse, and unnamed examples elsewhere in the Illinois Basin.

The Cardiff coal is a channel-fill deposit. Drilling and mine records near Cardiff portray the seam running east to northeast in a belt that varies from a few hundred feet to about one-half mile (~100 to 800 m) wide (Cady 1915). Coal having the same characteristics was encountered in surface mining at Clarke City, on the eastern edge of Grundy County, about 7 mi (11 km) north-northeast of Cardiff (Smith et al. 1970). Whether the Cardiff and Clarke City deposits connect is unknown. In cross-section, the coal body is crescent-shaped, concave upward. Coal reaches 12 ft (3.6 m) thick and the total seam thickness (with interbedded clastics) attains 19 ft (5.8 m). In some places, the seam terminates abruptly at the margins; elsewhere, it interfingers or grades out to shale.

As outlined by Cady (1915) and Smith (1970) and by drilling records, the Cardiff coal includes thick layers of shale and claystone. Cady reported “sandstone and pebble conglomerate” in the floor, evidently a channel lag deposit. The roof is normally medium to dark gray shale, but one borehole log reported “dark fossiled shale” immediately overlying the coal.

Detailed descriptions are not available. The lower contact probably is erosive in places; elsewhere, coal grades downward to channel-lag sandstone and conglomerate. The upper contact apparently is gradational, intertonguing with shale.

No geophysical log showing the Cardiff coal is known.

Summarizing the spore composition of the Cardiff, Peppers (1970, p. 49) stated, “The Cardiff Coal is interpreted as an earlier abandoned channel phase of deposition of the Lowell [Survant] Coal. It may actually be a little older than the Lowell Coal of other parts of the Illinois Basin because the spore assemblage has some aspects of the No. 2 [Colchester] Coal assemblage. This is not surprising because Cady (1915, p. 35) reported that the Cardiff coal in places rests on top of the No. 2 Coal. On the other hand, the ecological conditions in a coal swamp forest growing in a narrow channel-like depression must have been somewhat different from conditions in a more shallow, wide depression. Therefore, the differences in spore content that exist between the Cardiff and more typical Lowell Coal may be more a reflection of the differences of environment than of geological age.”

The Cardiff coal is here interpreted to be part of the Survant Coal Member.

The Cardiff coal originated as peat accumulating in an abandoned channel. This feature must have been abandoned shortly after it was cut; only a thin lag deposit underlies the peat (coal).

This bed supported a few local underground mines. Reserves have not been estimated.