From ILSTRAT
(Redirected from 3830)
Jump to navigation Jump to search

J.M. Weller (1940, p. 38) first used the name in the form “Pounds formation” or “Pounds sandstone” (of Caseyville group). Foreshadowing this usage, S. Weller (1920, p. 226) wrote, “Succeeding the second mass of shale and sandstone is the third conglomerate and sandstone member of the Caseyville, over 100 feet [30 m] thick, forming the top of the formation. . . . Along the northern border of [Hardin] county the same bed forms the high cliffs at The Pounds in southern Gallatin County. . .”

Some early authors referred to this unit as the “upper conglomerate” of the Caseyville. For a time, the uppermost Caseyville sandstone was considered to be the Makanda sandstone (Lamar 1925), at least in part.

Since Weller (1940), the name Pounds has consistently been applied to the uppermost widespread, cliff-forming sandstone of the Caseyville.

None was specifically designated or described, but the sandstone makes up part of the Pounds Escarpment and is prominently exposed in Pounds Hollow Recreation Area in southern Gallatin County.

From the beginning, the Pounds was considered the uppermost prominent pebbly sandstone of the Caseyville Formation. In circular fashion, Kosanke et al. (1960) defined the Caseyville top as the top of the Pounds Sandstone Member. The problem is that the Pounds cannot be distinguished from other Caseyville sandstone bodies except by its stratigraphic position. Palynology of overlying coal beds (Peppers 1996) indicates that the youngest sandstone of Caseyville lithology (quartz arenite with common quartz pebbles) is roughly the same age in different areas of the Illinois Basin. Nevertheless, it is likely that sandstone bodies that have been identified as Pounds in different areas are not all the same age.

From its type area, the Pounds Sandstone has been mapped through parts of Hardin, Pope, southern Gallatin and Saline, and eastern Johnson Counties in Illinois, as well as adjacent areas of western Kentucky. Here, the thickness of the unit varies from zero to more than 100 ft (30 m) and is commonly 40 to 80 ft (12 to 24 m), forming escarpments that can be followed for miles. West of Johnson County, the Pounds probably is present but forms less continuous escarpments and has not been identified during geologic mapping. Three of the best places to appreciate scenic features of the Pounds Sandstone are at Ferne Clyffe and Garden of the Gods State Parks and Bell Smith Springs in Pope County (Wiggers 1997). Southward in Kentucky, where multiple, thick Caseyville sandstones are identified, the upper sandstone is sometimes labeled Pounds, or an inference is made to possible correlation to the Pounds Sandstone in Illinois (e.g., Greb et al. 1992). 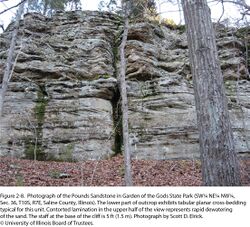 Figure 2-8. Photograph of the Pounds Sandstone in Garden of the Gods State Park (SW1/4 NE1/4 NW1/4, sec. 36, T10S, R7E, Saline County, Illinois). The lower part of the outcrop exhibits tabular planar cross-bedding typical for this unit. Contorted lamination in the upper half of the view represents rapid dewatering of the sand. The staff at the base of the cliff is 5 ft (1.5 m). © University of Illinois Board of Trustees. Photograph by Scott D. Elrick.

Like other sandstone of the Caseyville Formation, the Pounds Member is quartz arenite that contains, at most, a small percentage of nonquartz grains, which are largely muscovite flakes and grains of heavy minerals. Quartz pebbles are rare to abundant, but in most places, they are fewer and smaller (less than ½ inch, 13 mm) than those of the Battery Rock Sandstone. However, near the Caseyville type area, the Pounds is thicker and more conglomeratic than at Battery Rock (Baxter et al. 1963). Unidirectional trough and planar cross-bedding is prevalent, along with current and interference ripples. In many exposures, the sandstone is massive or exhibits large-scale contorted lamination, which likely originated with rapid dewatering of the sediment (Figure 2-8). Typically, the Pounds displays an upward-fining profile. Lenses of shale and siltstone and rafted mats of coal are locally present (Baxter et al. 1963; Baxter and Desborough 1965, 1967; Jacobson 1992; Nelson 1993; Weibel et al. 1993; Nelson and Weibel 1996).

The Pounds typically displays sharp-based, blocky, and uniform spontaneous potential, resistivity, and gamma-ray profiles, in some cases fining upward toward the top.

Casts of logs are locally present.

The Pounds is near the top of the Morrowan Stage. In the Appalachian Basin, the uppermost Morrowan quartzose sandstone is the Corbin Sandstone Member of the Grundy Formation; in Ohio, it is the upper Sharon Conglomerate; in southwest Virginia, possibly the Gladeville Sandstone; and in Alabama, the upper Pottsville Formation (Greb and Chesnut 2009; Ruppert et al. 2010).

Aside from enhancing scenery of the Shawnee Hills, the Pounds Sandstone is commonly a good aquifer. This sandstone may formerly have been quarried for building stone, millstones, and gravestones.