From ILSTRAT
(Redirected from 3000)
Jump to: navigation, search

Savage (1927, p. 309) published a chart that showed the “Francis Creek shale and limestone” overlying the Colchester Coal. Wanless (1929, p. 49, 89) restricted the Francis Creek “to the soft gray shale between the coal and the black shale,” the definition that remains current.

The shale took its name from Francis Creek in Fulton County, Illinois. The origin of the name of the stream is unknown.

Usage of the name Francis Creek Shale has remained stable since 1929. This unit has received considerable renown because of its exceptional preservation of fossil land plants and soft-bodied animals in siderite concretions. 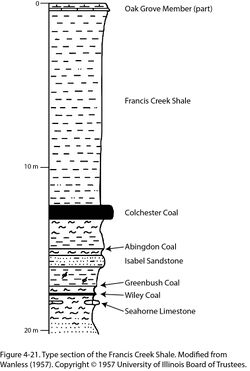 Figure 4-21. Type section of the Francis Creek Shale. Modified from Wanless (1957). Copyright © 1957 University of Illinois Board of Trustees.

The section is a road cut on the west side of Francis Creek in the NE¼ SW¼ of sec. 22, T 5 N, R 1 E, Fulton County, on the Adair 7.5' quadrangle. A graphic version of the section is presented here (Figure 4-21). Wanless described the unit as being 39 ft 6 in. (12.0 m) thick and composed of shale that is “greenish gray, spheroidal weathering, lower 5 ft [1.5 m] slightly sandy, gray.” No further details from this site are on record. 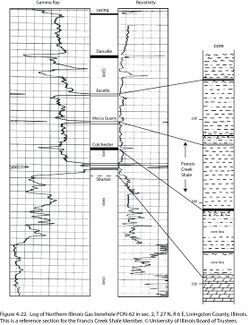 Logs of the #PON-62 borehole are filed in the Coal Section of the ISGS. Core is archived at the ISGS Geological Samples Library under call number C-4633. 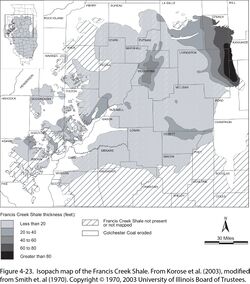 In the Illinois Basin, the Francis Creek Shale is confined to the northern half of Illinois. Decatur, Springfield, and Jacksonville are near the southern limit. An isopach map (Figure 4-23) shows that the thickest shale, more than 80 ft (24 m) thick, is at the northeast corner of the basin, an erosional limit. Kuecher et al. (1990) reported a maximum thickness of 34 m (112 ft) from cores near Braidwood in Grundy County. The unit thins westward and southward in an irregular fashion. Abrupt local thickness variation is the rule. Culver (1922) noted that the shale commonly thickens above depressions of the Colchester, and the coal itself thickens into these swales. Smith (1970) presented an example of pods of Francis Creek Shale confined to depressions in the coal (Figure 4-24).


Small areas of Francis Creek have been mapped in Indiana and Kentucky, as well as in Iowa, Missouri, Kansas, and Oklahoma, where the unit is called by different names. The shale attains a thickness well in excess of 100 ft (30 m) in Oklahoma (Wright 1965; Smith 1970).

The Francis Creek has been studied more thoroughly than have most Pennsylvanian shale units, in part because of its association with an economic coal seam, but mostly because of its world-famous Mazon Creek fauna and flora.


In most of its range, the Francis Creek is mudstone or weakly layered shale that is light to medium gray and clayey to finely silty. On the northeast, where the unit is thickest, it grades to siltstone and typically coarsens upward to sandstone. Sandstone also occurs as channels scoured into the shale. In the northeastern area, the Francis Creek commonly exhibits rhythmic pinstripe lamination with clearly defined tidal neap and spring cycles. These can be seen in vertically slabbed siderite concretions as well as in the shale itself (Kuecher et al. 1990; Archer et al. 1995). Bedding may be inclined to the top of the Colchester Coal, signifying prograding or laterally aggrading sediment wedges (Baird 1997, p. 35–51).

Mazon Creek fossils occur in siderite (iron carbonate) concretions embedded in the shale. Initial discoveries were made in outcrops along Mazon Creek and nearby streams in Grundy County. Spoil banks and waste piles from coal mines subsequently provided collecting grounds that are still being exploited. It is noteworthy that amateurs collected the great bulk of Mazon Creek fossils. The Illinois State Fossil, Tullimonstrum gregarium, or “Tully monster,” is an animal of unknown affinities that has been found nowhere else. Although somewhat overshadowed by the soft-bodied animals, the fossil flora has the largest number of species and greatest taxonomic diversity of any Paleozoic flora in North America (Peppers and Pfefferkorn 1970; Pfefferkorn 1979) and of any Moscovian (Westphalian D) assemblage in the world (Wittry 2006). A flora of equivalent age and preservation has been described from shale overlying the Henryetta Coal (Colchester equivalent) in Oklahoma (Moore et al. 2014).


The Francis Creek also contains invertebrate fossils preserved in shale, not as concretions. In the northeastern corner of the outcrop belt, these are mostly bivalves that occur sparsely in the basal layers of the shale. A brackish to marine shelly fauna that includes Lingula, Mesolobus, and other articulate brachiopods; myalinid and nuculoid pelecypods; gastropods; ostracods; and conodonts has been identified in the lower part of the Francis Creek in western Illinois (Shabica 1970).


Some authors have defined two distinct assemblages of Mazon Creek fossils. These are the Braidwood assemblage, restricted to the far northeastern area, and the more widely distributed Essex assemblage. More than 90% of Braidwood fossils are land plants, which are accompanied by coprolites, bivalves, Cyzicus (formerly called Estheria), shark teeth and egg capsules, shrimp, horseshoe crabs, insects, spiders, millipedes, and centipedes. These fossils were derived from terrestrial and freshwater to slightly brackish-water environments. The Essex assemblage comprises jellyfish, marine bivalves, polychaetes and other marine worms, crustaceans, shrimp, holothurians, Tully monsters, and more, all indicative of more offshore but still brackish (not fully marine) conditions (Baird et al. 1985a, 1985b; Shabica and Hay 1997; Wittry 2012). However, Clements et al. (2018) contended that there is no evidence for a distinct truly fresh-water ecosystem and that the “Braidwood fauna” represent areas closer to the paleo-coastline, where rivers carried in plant and animal remains from upstream sources.

Ravn et al. (1984, p. 35–37) gave the name Oakley Shale Member to the predominantly marine shale interval above the Whitebreast [Colchester] Coal and below the Ardmore Limestone in Iowa. They reported that in southern Iowa, the Oakley is predominantly black, fissile, phosphatic shale, whereas in south-central Iowa, “plant fossil-bearing gray shales and siltstones that range up to 22 ft (6.7 m) thick” separate coal from black shale. Maintaining the same definition, Gentile and Thompson (2004) extended the Oakley Shale Member into Missouri. Both teams of authors correlated the black, fissile portion of the Oakley with the Mecca Quarry Shale in Illinois, but neither team acknowledged the similarity of the gray portion of the Oakley to the Francis Creek.


In Kansas and Oklahoma, the Francis Creek analogue remains unnamed, although Howe (1956) acknowledged that gray shale overlying the Croweburg Coal in Kansas is equivalent to the Francis Creek. In Oklahoma, Hemish (1986) reported that where the shale ranges from about 10 to 50 ft (3 to 15 m) thick, the Croweburg Coal contains less than 1% sulfur and has a high heating value of more than 13,000 Btu/lb.

Baird (1997, p. 35–51) envisioned Francis Creek Shale accumulating as deltas that rapidly prograded into an embayment or estuary that opened outward toward the west. Rhythmic lamination patterns indicate semidiurnal mesotidal to macrotidal ranges, that is, twice-daily tides with a moderate to high tidal range (Kuecher et al. 1990; Archer et al. 1995). The preservation of upright tree trunks, sideways leaves, escape burrows, and soft-bodied animals demands “near torrential sediment aggradation” comparable to that experienced today in areas of clear-cut timbering (Baird et al. 1985a, 1985b). By counting neap–spring tidal cycles in the Braidwood area, Kuecher et al. (1990) determined an average sedimentation rate of 3.3 ft (1.0 m) per year. Such a phenomenal rate of burial helps explain the preservation of soft-bodied organisms. These authors also visualized the setting as an estuary. Clements et al. (2018) interpreted the setting as “a marine bay where allochthonous terrestrial and native marine organisms were buried in an environment favourable for siderite concretion formation.” Their discussion of the fossilization process is one of the most complete to be found in the literature.