From ILSTRAT
(Redirected from 2870)
Jump to navigation Jump to search

In an unpublished manuscript, Searight (1925–1927) described the “Kerton Creek beds” in southern Fulton County, Illinois. First to mention the Kerton Creek coal in print was Ekblaw (1931), who presented no details. Wanless (1957) made the first detailed description of the Kerton Creek Coal; Kosanke et al. (1960) formalized the unit as a member.

The name refers to the stream along which most of the exposures were found.

The type section consists of road cuts, stream banks, and mine openings near the center of the NE¼ sec. 15, T 3 N, R 2 E, Fulton County, on the Astoria 7.5' quadrangle. 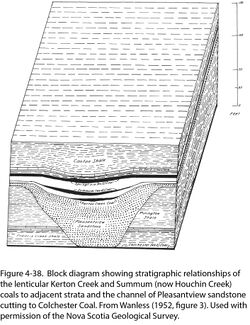 Figure 4-39. Drawing showing the Kerton Creek Coal with middle clastic layer, which may be the division between the Wheeler and Bevier Coals. From Searight (unpublished manuscript, 1925-1927, figure 22).

Like the Cardiff coal bed and the Roodhouse coal bed, the Kerton Creek is a highly localized deposit confined to channels. As Wanless (1957, p. 98) wrote, “Not even a coaly streak is found to mark its position outside the limited areas where it is present, all of which are in areas of channel deposits of the Pleasantview Sandstone” (Figure 4-38). Wherever the Kerton Creek is present, the overlying Houchin Creek Coal occupies a “stacked” trough and thickens from its normal ≤0.5 ft (15 cm) to 4 ft (120 cm) or more. Smith and Berggren (1963) identified several localities in Fulton and Knox County where this relationship exists. Thus, like Wanless (1952), I interpret the Kerton Creek coal to be Survant Coal that developed as peat in abandoned channel(s). Being redundant, the name “Kerton Creek Coal Member” is dropped from formal usage, although “Kerton Creek coal bed” may be used informally with reference to the type area. The presence of a middle clastic layer at some localities (Figure 4-39) suggests that both Wheeler and Bevier coals may be present.

Kerton Creek coal has been reported at several localities in Fulton County, Illinois, and it may occur in Knox County (Wanless 1957; Smith and Berggren 1963). All these deposits are highly localized. The coal dips into troughs 10 to 20 ft (3 to 6 m) deep and attains a maximum thickness of about 5 ft (1.5 m). Not enough information is at hand to determine channel trends or dimensions.

The coal is commonly shaly and locally “canneloid.” At the type locality, a claystone layer about 1 ft (0.3 m) thick is near the middle of the seam (Figure 4-39). Wanless (1957) stated that the Kerton Creek has no underclay and is overlain by either “gray shale containing plant leaves” or by “black sheety shale with a limited marine fauna.”

Little information has been published, but two sections in Wanless (1957) suggest sharp lower and upper contacts.

No geophysical log showing the Kerton Creek coal is known.

The Kerton Creek coal is herein interpreted to be the Survant Coal Member. It may include either the Wheeler and Bevier Coal Beds, or both.

The Kerton Creek originated as peat that filled abandoned channels in the late stage of valley filling. Subsequent compaction of this peat maintained the trough that was filled with overthickened Houchin Creek peat.

Mines that worked this deposit were small, local affairs. The extent of the deposit is unknown but is probably small.