From ILSTRAT
(Redirected from 2860)
Jump to navigation Jump to search

Little has been published about this coal. Wanless (1956) showed it on a chart; Wanless (1957, p. 98) briefly noted the coal at Roodhouse and compared it to the Kerton Creek. Kosanke et al. (1960) elevated Roodhouse Coal to a formal member of the Carbondale Formation. Smith (1961) observed that the Roodhouse Coal ranged up to 8 ft (2.4 m) thick and was partly canneloid. Smith located the Roodhouse below the Houchin Creek and about 30 ft (9 m) above the Colchester Coal.

In 1866, John Roodhouse founded the Greene County, Illinois, town that bears his name as a division point on the Alton Railroad (Callary 2009). “Rood” is an old term for the Christian cross. 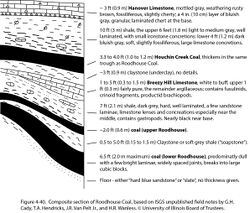 Southeast of Roodhouse, in the NW¼ of sec. 21, T 12 N, R 11 W, Greene County, Illinois. No description has heretofore appeared in print. A composite section from the type area, based on unpublished field notes by G.H. Cady, T.A. Hendricks, J.R. Van Pelt Jr., and H.R. Wanless (in the ISGS Library), is presented here (Figure 4-40).

Like the Cardiff coal bed and the Kerton Creek coal bed, the Roodhouse is a channel deposit. Smith (1961) reported that the Roodhouse lies about 30 ft (9 m) above the Colchester and an unspecified distance below the Houchin Creek. The only known deposit is elongate east–west, but its dimensions are poorly constrained.


The Roodhouse is believed to be another example of overthickened Survant Coal Member that originated as peat within an abandoned fluvial channel. The presence of two coal layers separated by shale or claystone implies that both the Wheeler and Bevier Coal Beds are present. Accordingly, the name “Roodhouse Coal Member” should be dropped from formal usage, although the term “Roodhouse coal bed” may be used informally to refer to the deposit in the type area.

Smith (1961, p. 17) reported that the unit occurs only in parts of Secs. 19, 20, and 21 of T12N, R11W, Greene County. Unpublished field notes (cited under Type Section) reveal that the coal occupied a narrow trough-like depression oriented east–west.

Unpublished field notes depict two coal beds separated by soft claystone or gray shale 0.5 to 6 ft (15 to 180 cm) thick. The lower coal, which was mined, was as thick as 6.5 ft (nearly 200 cm) along the axis of the trough. The lower Roodhouse was called “block coal” because it broke out in large, cubic blocks bounded by joint faces. G.H. Cady (unpublished field notes, 1927) described it as “predominantly dull—with only fine bright streaks. Either cannel or very high in ash.” No details are available on the upper Roodhouse, which averaged about 2 ft (60 cm) thick.


Overlying the trend of thick Roodhouse coal, the Houchin Creek Coal, “with thickness of 3 ft [0.9 m] or more, is probably limited to about the same basin as the block coal below” (H.R. Wanless, field notes, 1934). The Kerton Creek and Houchin Creek coals likewise thicken in concert.

As indicated by field notes, boundaries of the coal deposit are sharp.

No geophysical log showing the Roodhouse coal is known.

Published reports do not mention any fossils.

The Roodhouse coal is here considered to be the Survant Coal Member, comprising both the Wheeler and Bevier Coal Beds with a medial claystone or shale layer.

The coal at Roodhouse represents peat that accumulated in an abandoned channel that was subsequently drowned during a marine transgression. Both the Wheeler and Bevier Coal Beds probably are represented. A rise in sea level drowned the channel and left marine shale and limestone. Subsequent compaction maintained the linear depression during deposition of Houchin Creek peat and overlying sediments. Notice (Figure 4-40) that the shale above the Houchin Creek in the Roodhouse area is not the typical black, sheety Excello Shale.

Mines that worked this deposit were small, local affairs. The extent of the deposit is unknown but probably is small.