Many previous authors (e.g., Lee 1916; Wanless 1939; Jacobson 1987, 1993) noted the occurrence of black, hard, fissile shale directly overlying the Davis Coal Member. This shale has been logged in many outcrops, mines, and cores and is readily identified by its “hot” inflection on gamma-ray logs. The presence of the black shale helps differentiate the Davis Coal from the younger Dekoven across large areas of Illinois and western Kentucky. A unit of such extent and importance deserves recognition in formal nomenclature. The name Will Scarlet Shale Member is hereby selected.

The name refers to the Will Scarlet Mine, a surface mine that worked the Davis and Dekoven Coals from 1953 to 1987 in Saline and Williamson Counties, southern Illinois.

So far as is known, only informal, descriptive terms have previously been applied to this unit.

Drawing on the “Sherwood Forest” association, S.F. Sherwood, founder and president of the Stonefort Corporation, named his mines for characters in the Robin Hood legend. Other Sherwood mines included Little John and Allendale (Allen-a-Dale) in western Illinois and Friar Tuck, Maid Marian, and Robin Hood in Indiana. In 1968, Peabody Coal Company purchased the Will Scarlet Mine and worked it until its reserves were exhausted. The Will Scarlet Shale, as defined here, was frequently exposed while the mine was active. However, upon closure, all the pits were backfilled and no bedrock exposures remain.

Because no suitable outcrops or mine exposures are known, a drill core is chosen to exemplify the Will Scarlet Shale. The core is from the ISGS #1 Morris borehole, which was drilled a few miles (kilometers) northwest of the Will Scarlet Mine (SW¼ NE¼ NE¼ sec. 6, T 10 S, R 4 E, Williamson County, ISGS county no. 23996, Crab Orchard 7.5' quadrangle). In the Morris core, the Will Scarlet Shale is 5.5 ft (168 cm) thick and directly overlies the Davis Coal in the depth interval of 162.0 to 167.5 ft (49.4 to 51.1 m; Figure 4-15). Gamma-ray and electric logs were run in the Morris borehole.

Logs from the #1 Morris borehole are on file at the Geological Records Unit of the ISGS and are available online at the Survey’s website. Core is archived at the ISGS Geological Samples Library under call number C-15257.

Core from the Kentucky Geological Survey’s Gil 15 borehole is hereby chosen. The hole was drilled close to Dekoven in Union County, Kentucky; its core also serves as the reference section for the Davis and Dekoven Coal Members. The Will Scarlet Shale is about 2.1 ft (64 cm) thick and directly overlies the Davis Coal in the depth interval of 174.7 to 176.8 ft (53.2 to 53.9; Figure 4-13).

Core from Gil 15 is archived at the Kentucky Geological Survey’s core storage facility in Lexington.

The Will Scarlet Shale directly overlies the Davis Coal throughout most of the extent of the latter. Overlying the black shale are gray shale, siltstone, and sandstone, typically coarsening upward. Where the Davis and Dekoven Coals are close together, the Will Scarlet changes to gray shale of normal gamma-ray intensity, thus losing its identity.

The Will Scarlet Shale is present in most of the area of southern Illinois and western Kentucky where the Davis Coal has been mined. The typical thickness is in the range of 1 to 3 ft (30 to 90 cm). The thickness of 5.5 ft (168 cm) in the type core approaches a maximum. Authors such as Wanless (1957) described similar black shale above the Davis (formerly Wiley) Coal in western Illinois. Northward from the outcrop, the Will Scarlet Shale continues in the subsurface and commonly retains its character until the Dekoven and Davis Coals are nearly merged to form the Seelyville Coal. In some cases, the black shale is present where the Davis Coal is absent and serves to identify the position of the Davis.

The Will Scarlet is typical Pennsylvanian black shale, being hard and brittle, readily splitting into large thin sheets, and having a rock density lower than normal gray shale. A “hash” of shell fragments, replaced by pyrite, commonly occurs at the base. Thin, nodular limestone containing marine fossils locally occurs at the top.

The Will Scarlet Shale directly overlies the Davis Coal with a sharp contact. The upper contact of the Will Scarlet is generally gradational to gray shale of normal density and gamma-ray character. 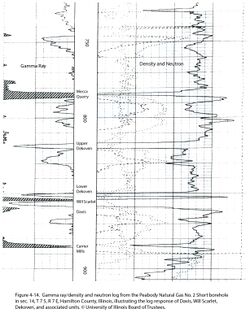 On gamma-ray logs, the Will Scarlet is moderately “hot,” having a higher reading than normal gray shale but generally lower than the adjacent Mecca Quarry, Carrier Mills, and Veale Shales (Figures 4-14 and 4-15).

Previous publications treated this unit in cursory fashion. No faunal lists are known, and conodont biostratigraphy has not been evaluated.

The age is middle Desmoinesian. The most likely Midcontinent equivalent is the shale overlying the Mineral Coal Bed and underlying the Russell Creek Limestone (Figure 4-12). The next older cyclothem, the Upper Tiawah, has been correlated with the Carrier Mills Shale on the basis of its conodonts (Heckel 2013). Conodonts from Russell Creek, Robinson Branch, and Fleming cyclothems have been identified, but those of the Will Scarlet Shale are unstudied.

Being typical black, fissile shale, the Will Scarlet fits the general model for such shale.