The term “Wheeler coal” first appeared in White’s (1870) pioneer survey of the state of Iowa.

The name refers to Wheeler’s Mill in Lucas County, Iowa.

No alternate formal names surfaced, but confusion between the Wheeler and Bevier coals reigned for decades.

Usage of the names Wheeler and Bevier remained in flux for nearly a century (see Gentile and Thompson 2004; Pope 2012). Howe and Koenig (1961) appear to be the first to establish the presently accepted Midcontinent succession, with Wheeler Coal being older and Bevier younger. Ravn et al. (1984) integrated both coals into a new formational framework for Iowa. Currently, the Wheeler and Bevier Coals are formal units at the rank of bed in Missouri (Gentile and Thompson 2004) and Iowa (Pope 2012). The coal bed that is called Bevier in Kansas actually is the Wheeler, based on lithology and fossils of the overlying limestone (Wright 1965). The true Bevier in Kansas probably is the Iron Post coal, which lies between the “Bevier” (Wheeler) and Mulky Coal (Houchin Creek correlative).

The type section is an outcrop at the site of Wheeler Bridge, which formerly spanned the Swede Hollow tributary to Whitebreast Creek in the NW¼ NE¼ sec. 33, T 73 N, R 22 W, in Lucas County, south-central Iowa.

White (1870) identified this outcrop but did not fully describe it.

According to Ravn et al. (1984), the exposure still exists but is in poor condition. The principal reference section is closely adjacent. 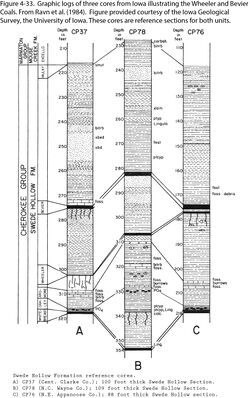 Figure 4-33. Graphic logs of three cores from Iowa illustrating the Wheeler and Bevier Coals. From Ravn et al. (1984). Figure provided courtesy of the Iowa Geological Survey, the University of Iowa. These cores are reference sections for both units.

The present condition of the Swede Hollow outcrop has not been verified. The Iowa cores are stored at the Iowa Geological Survey in Iowa City.

The Wheeler Coal is ranked as a member where it is separate from the younger Bevier Coal. Where the two seams merge, they become beds within the Survant Coal Member.

In Illinois, the Wheeler Coal Bed tends to be thinner and less continuous than the Bevier. In most areas, the Wheeler is 1.5 ft (45 cm) or thinner, although locally it reaches 3 ft (90 cm). Where the two seams merge, the clastic layer usually lies below the midpoint. In addition, where the merged coal was mined underground in Indiana, the shale layer normally lies at or below the middle of the seam (Harper 1985, 1988a).


In many cores and well logs, the Wheeler Coal is absent but its position is clearly indicated at a sharp contact between two upward-coarsening sequences. Dark gray, fissile shale of the upper sequence rests sharply on siltstone or sandstone of the lower sequence. In such cases, underclay or a rooted zone rarely is present, implying that the paleosol has been truncated. See also the Survant Coal Member.

The Wheeler normally is bright-banded coal. Where it occupies abandoned channels, the coal tends to be dull and contains numerous laminae and interbeds of shale and mudstone. The underclay (paleosol) is weakly developed. Typically, rooted mudstone less than 1 ft (30 cm) thick grades downward to siltstone or sandstone. Slickensides and siderite nodules may be developed, but the substrate of the coal commonly retains fissility and lamination.

Typical for coal. Where coal is absent, its position is commonly marked by a sharp inflection between two upward-coarsening sequences.

Before the relationships of these beds had been worked out, Peppers (1970) compared spore floras of the Lowell, Shawneetown, Cardiff, and Coal IV (Survant) of Indiana. He reported that all four were closely similar to one another and distinct from the older Colchester and younger Houchin Creek Coal.

No direct correlative has been identified outside the Illinois and Midcontinent Basins.

Like the older Davis and Dekoven Coals, both the Wheeler and Bevier represent extensive coastal peat deposits that developed during separate eustatic cycles of sedimentation. Sea-level fluctuations were of relatively low amplitude. One hypothesis is that the Wheeler peat accumulated on an uneven surface that included abandoned river channels. Upon transgression, the entire peat deposit was submerged, but clastic sediment accumulated only in the depressions. As the sea level dropped, the climate changed back to ever-wet and peat accumulation (Bevier) resumed on a nearly level surface. An alternate model is that peat accumulation (perhaps in raised bogs) was continuous from Wheeler through Bevier time in areas of slow subsidence, whereas the peat was drowned and covered with a wedge of clastic sediment in more rapidly sinking basinal areas (David A. Williams, Kentucky Geological Survey, written communication, 2017).

Mining of the Wheeler Coal in the Illinois Basin has been almost entirely confined to areas where the Wheeler and Bevier have merged as the Survant Coal.