Worthen (1870, p. 93, 100) first noted the presence of black shale overlying coal No. 5 (Springfield) in Fulton County, Illinois. Innumerable subsequent authors discussed the shale, but none proposed a formal name until Nelson (1983a) offered the present name.

The name refers to the Turner No. 1 Mine, where the core that serves as the type section was drilled. The mine buildings and portal are shown, but not labeled, on the Crab Orchard 7.5' topographic map.

No consistent term, formal or otherwise, was applied to this unit prior to 1983. The equivalent black shale unit in the Midcontinent was part of the Little Osage Formation until Gentile and Thompson (2004) named it the Binkley Shale Member. 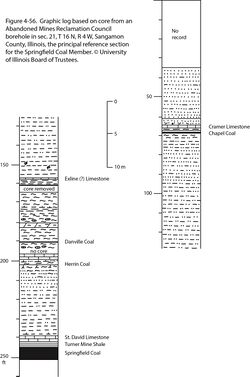 Across most of the Illinois Basin, the Turner Mine Shale directly overlies the Springfield Coal and underlies the St. David Limestone. Near the Galatia channel, the Dykersburg Shale Member separates coal from black shale.

The Turner Mine is more or less coextensive with the Springfield Coal throughout the Illinois Basin, and it extends beyond the limits of the coal in northern Illinois (Willman and Payne 1942). The black shale is absent across much of the Western Shelf where the coal is thin or missing, and it generally pinches out where the Dykersburg Shale is thicker than 30 to 40 ft (9 to 12 m). The thickness of the Turner Mine averages about 3 ft (1 m), ranging from less than 1 ft to about 5 ft (0.3 to 1.5 m). The greatest known thickness is 7.9 ft (2.4 m) in a core in Williamson County. Rarely is the Turner Mine absent where both Springfield Coal and St. David Limestone are present.

Although hundreds of maps and reports note this unit in cursory fashion, only a few (notably Willman and Payne 1942; Wanless 1957) provide extended descriptions. No known publications have focused on this unit. Thousands of unpublished field notes and core descriptions provide further information. Except near its depositional limits, this shale is black, hard, and highly fissile or “sheety” and has a lower density than Pennsylvanian gray shales. The shale often weathers to a light bluish or silvery gray. Spheroidal and ovoid concretions of dark gray microgranular limestone that range up to more than 2 ft (60 cm) across are common. The shale lamination bends around these concretions. Large, planar, widely spaced joints outline rectangular or rhombohedral blocks. Laminae and small lenses of phosphatic material are numerous. Pyrite laminae and lenses also are numerous, especially at the base, where a lag deposit of pyritized shell fragments may occur. In many exposures, the upper part of the member is mottled with gray, green, and olive and is soft and flaky rather than sheety. Near its depositional limits, the entire unit may become mottled and soft.

Both contacts typically are sharp; the lower one is widely erosive on the Dykersburg Member.

Typical for black phosphatic shale, gamma-ray readings are extremely high, whereas neutron and density values are low (but not as low as coal). The Turner Mine does not stand out on most electric logs.

The ammonoids reported by Wanless (1958) indicate late Desmoinesian age without allowing precise interbasin correlation, according to Boardman et al. (1994). Work et al. (2009) correlated the Washingtonville Shale of the northern Appalachian Basin with the Little Osage Shale (Kansas and Missouri) and Wetumka Shale (Oklahoma) on the basis of ammonoids. Using conodonts, Heckel (2013, p. 18) confirmed that the Little Osage correlates with the Turner Mine Shale. Physical stratigraphy and fossil spores from the Springfield Coal (Peppers 1996) bolster these correlations.

See the general model for black shale in the Introduction.

The Turner Mine Shale is the immediate roof of many underground mines in the Springfield Coal. It is moderately competent and less sensitive to moisture than the Dykersburg Shale.