Gordon (1896, p. 19) wrote, “Lagonda sandstones and shale—we have thus designated the arenaceous deposit varying from 18 to 50 ft [5.4 to 15 m] in thickness, immediately overlying the Bevier coal and constituting the uppermost division of the Lower Coal Measures.”

The unit was named for the village of Lagonda, in Chariton County, north-central Missouri. According to the State Historical Society of Missouri, the origin of the name Lagonda is unknown. A post office was established here in 1881 (https://shsmo.org/manuscripts/ramsay/ramsay_chariton.html). 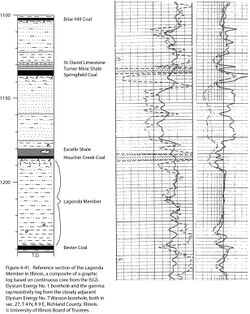 Figure 4-41. Reference section of the Lagonda Member in Illinois, a composite of a graphic log based on continuous core from the ISGS Elysium Energy No. 1 borehole and the gamma ray/resistivity log from the closely adjacent Elysium Energy No. 7 Wasson borehole, both in sec. 27, T 4 N, R 9 E, Richland County, Illinois. © University of Illinois Board of Trustees.

Gentile and Thompson (2004) described and illustrated three sections in Missouri. A reference section for the Lagonda Member in Illinois is presented below.

The Lagonda has been variously classified as a member or as a formation in Missouri; it is currently a formation (Gentile and Thompson 2004). The lower boundary has remained stable at the top of the Bevier Coal Bed, but various authors have shifted the upper boundary. As presently defined, the Lagonda extends to the base of the Breezy Hill Limestone Member, which is at the base of the overlying Mulky Formation (Gentile and Thompson 2004).

In Missouri, the Lagonda generally ranges from 35 to 95 ft (11 to 28 m) thick, except near the Lincoln fold (anticline) north of St. Louis, where it pinches out (Searight and Howe 1961; Gentile and Thompson 2004). No isopach maps of this interval in the Illinois Basin are known. A survey of unpublished cross sections and core data shows a thickness range from less than 10 ft (3 m) to about 90 ft (27 m) in the Fairfield Basin and central part of the Western Shelf. The greatest thickness was found in western Fayette County. The Lagonda thickness does not show an obvious relation to basin structure. Data from Edwards County, near the basin center, show a thickness of less than 20 ft (6 m), whereas in Macoupin County on the Western Shelf, the Lagonda varies from less than 20 to more than 60 ft (~6 to 18 m) thick. On most of the Sparta Shelf and west of the Illinois River, the Survant Coal is absent, the Survant and Houchin Creek underclays merge, and the Lagonda Member is absent. In western Kentucky, “the interval between the Survant and Houchin Creek coals is a 20- to 50-foot-thick (6 to 15 m) coarsening-upward sequence, except where the entire interval is composed of thick sandstone” (Greb et al. 1992, p. 45). 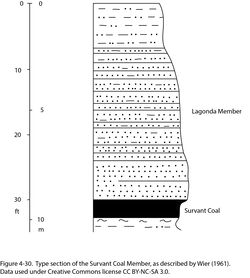 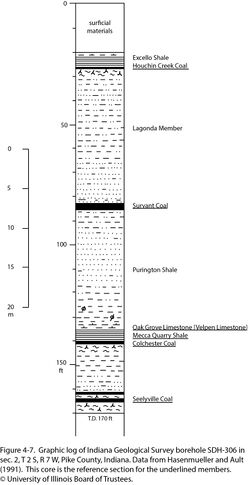 In Missouri, the Lagonda consists of shale, siltstone, and sandstone and tends to coarsen upward, but in places, sandstone fills channels that truncate the Bevier Coal. This sandstone is part of the well-known “Squirrel sand” of drillers, so named because it appears to “jump around” in the section. Marine fossils have been reported in shale near the base (Searight and Howe 1961; Gentile and Thompson 2004).


The lithology in Illinois is closely similar to that in Missouri. An upward-coarsening succession is prevalent. As shown by core data, shale at the base is dark gray to nearly black, silt-free to finely silty, and thinly fissile but not “slaty.” Siderite nodules are common. Silt content increases upward and siltstone or sandstone laminae appear. Planar, ripple, and cross lamination are present; some cores display well-developed tidal rhythmites. The upper part of the Lagonda may include siltstone and sandstone, which is laminated and burrowed. At the top, the rock grades to nonfissile claystone up to nearly 6.6 ft (2.0 m) thick, bearing slickensides, nodules, roots, and other features of a well-developed paleosol. Some logs indicate upward-fining sandstone that cuts down from the upper part of the Lagonda, filling valleys or channels. At their deepest, these valleys are incised 60 ft (18 m) below the Bevier Coal, cutting out the Colchester Coal. Examples of infilled valleys have been found in Effingham and Wabash Counties, as well as in the type (Figure 4-30) and reference section (Figure 4-7) for the Survant Coal Member. In northern Illinois, specifically a section near Lowell in LaSalle County, the lower part of the Lagonda consists of calcareous shale with nodules, lenses, and thin interbeds of limestone that yield marine fossils (Willman and Payne 1942; Smith et al. 1970; Trask 1987).

Both contacts are normally sharp but conformable to slightly disconformable. Where sandstone occupies incised valleys, the lower contact is erosive.

Electric logs show the typical response for upward-coarsening or upward-fining valley-fill successions, or both. On gamma-ray logs, the basal Lagonda exhibits profiles typical for clay shale.

Fossils are not common. A few core logs note Lingula, ostracods, and conchostracans(?) in dark shale near the base. Plant remains occur close to the contact with the Bevier Coal, and root traces are at the top of the Lagonda. Burrows and other trace fossils are common in sandy portions of the member. Planolites and Palaeophycus were identified in a core from White County. Marine fossils identified in shale and thin limestone from the lower Lagonda in LaSalle County include horn corals and the brachiopods Ambocoelia, Chonetes, Marginifera, Mesolobus, Neospirifer, and Squamularia.

Microfossils have not been identified, and zonation has not been established. The Lagonda is best correlated with reference to the palynology of the bracketing coal units (Peppers 1996). In Iowa, the Lagonda interval is the upper part of the Swede Hollow Formation. The marine Red Haw Limestone Member (Pope 2012), which closely overlies the Bevier Coal, probably has its counterpart in thin marine limestone near the base of the Lagonda Member in LaSalle County, Illinois.

The Lagonda Member incorporates transgressive, highstand, and regressive deposits of an intermediate-level cyclothem. Basal dark shale, bearing marine to brackish fauna, records a rapid advance of the sea. The lower part of the member probably accumulated in relatively deep water, below the normal wave base. Upward coarsening reflects a gradually falling sea level and the progradation of deltas into the basin. Water was likely brackish and tidally influenced. Late in Lagonda time, the Illinois Basin became fully emergent, paleosols developed, and deep valleys were scoured. Not enough is known of lithofacies trends to identify sediment source areas or tectonic trends beyond identifying much of the Western Shelf as a positive area. Local abrupt changes in thickness of the Lagonda, not clearly related to the known structure, suggest that some areas of thick Lagonda reflect sites where the basin was incompletely filled during previous sedimentary cycles.