On a chart, Wanless (1931, p. 192) showed the Isabel sandstone lying directly below the underclay of coal No. 2 [Colchester] and filling a channel that cuts through several underlying cyclothems. The first verbal description of the Isabel is in Wanless (1939, p. 26), who basically restated the information shown in the 1931 chart.

Wanless (1939) remarked that the name refers to Isabel Township in Fulton County, Illinois. Callary (2009) stated that the township took its name from “Point Isabel, a shipping station opposite Havana on the Illinois River. The source of the name is unknown.”

As Wanless (1957) described it, the section is less than ideal as a type because the interval between the Colchester Coal and the top of the Isabel is largely covered and the Abingdon Coal is not included. The present condition of the outcrop is unknown.

None has been proposed. Geologic sections 32 and 36 of Wanless (1957) are potentially better than the type section because they show Abingdon Coal above the Isabel and Greenbush Coal below. The present condition of these exposures is not known. A composite column (Figure 4-9) illustrates the overall relationships.

When Wanless (1931) named the Isabel Sandstone, the Browning Sandstone and Abingdon Coal were unknown. Wanless (1939) discussed the unit under the heading “Isabel (Browning) sandstone,” implying that the two are the same. Wanless (1956) charted the Browning in the Abingdon cyclothem, above the Greenbush Coal and below the Browning Sandstone in the Liverpool cyclothem. This chart does not show the Abingdon Coal. More explicitly, Wanless (1957) described the Abingdon cyclothem as containing, in ascending order, the Isabel Sandstone, underclay and underclay limestone, the Abingdon Coal, and an unnamed shale. Kosanke et al. (1960) formalized the Isabel as a member of the Spoon Formation; Willman et al. (1975) followed their lead. The Isabel Sandstone can thus be extended into the southeastern part of the Illinois Basin, where it is the sandstone lying between the Dekoven and Abingdon (“upper Dekoven”) coals. The Isabel pinches out as the Greenbush and Abingdon merge to become part of the Dekoven (or Seelyville) Coal Member. 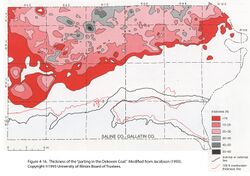 Figure 4-16. Thickness of the “parting in the Dekoven Coal.” Modified from Jacobson (1993). Copyright ©1993 University of Illinois Board of Trustees.

According to Wanless (1957), the Isabel is composed of sand that is very fine to fine grained and poorly sorted, having a silt and clay matrix. The upper part tends to be thinly bedded and the lower part cross-bedded to massive. The rock is limonitic and speckled brown on weathered exposures. The cement is calcium carbonate. Feldspar, mica, and garnet, all rare or absent in older sandstone units of the region, are conspicuous in the Isabel. Wanless (1957, p. 84) stated, “This is the only sandstone member in which tourmaline is more abundant than zircon.” Moore (2003) analyzed clay mineralogy of the Browning Sandstone.

No specific information has been published. The lower contact may be sharp but not deeply incised. Jacobson (1987) indicated that the Isabel may locally cut out the Dekoven Coal. The upper contact to the underclay of the Abingdon Coal is probably gradational.

Plant stems and root impressions are the only fossils; neither is common (Wanless 1957).

The Isabel Sandstone evidently correlates with clastic rocks that lie between the Robinson Branch (older) and Fleming Coal Beds in Missouri and Kansas.

Given the lack of mapping and detailed study, environments are speculative. The thick Isabel in southeastern Illinois may be a deltaic clastic unit with local development of distributary channels. Sediment apparently entered the basin from an easterly source bounded by the Rough Creek Fault System on the south and the southern end of the La Salle Anticlinorium on the north. A different source probably supplied sand to northwestern Illinois. The Isabel may include shallow incised valley-fill sediments.