Mining this seam began before the earliest geological surveys. Owen (1856) referred to the “Eleventh coal” or “No. 11 coal” in western Kentucky. Worthen (1868, p. 14–15) described Coal No. 6 in the Belleville area and at several places farther north in Illinois. However, Worthen’s Coal No. 5 in Jackson and Perry Counties later proved to be the Herrin (No. 6). DeWolf (1908) called it the Herrin No. 7 coal in Williamson and Saline Counties. Shaw and Savage (1912, p. 6, 7, 14, 15) first used the name “Herrin (No. 6) coal” for the seam mined near Herrin in Williamson County, Illinois. These were the first authors to correctly identify the Herrin Coal with the No. 6 coal previously designated elsewhere in Illinois. Shaw and Savage (1912) also named the Carbondale Formation, with the Herrin Coal at the top. Kosanke et al. (1960) formalized the name as Herrin (No. 6) Coal Member in Illinois. Jacobson et al. (1985) extended the Herrin Coal Member throughout the Illinois Basin.

Regarding the origin of the name, Callary (2009, p. 159) wrote, “Named from Herrin’s Prairie, itself named for Isaac Herring, generally regarded as the first permanent settler, who entered a claim at Shawneetown in 1816. Over time Herring’s name (informally pronounced [HEHR uhn] or [HEHR in] came to be written Herrin.”

Archaic names include Belleville coal in the St. Louis area, Grape Creek coal in the Danville area, and Second vein in the LaSalle area. Early geologists misidentified the No. 6 coal in southern Illinois (see below). People in the mining industry continue to call this the No. 6 coal in Illinois and the No. 11 coal in western Kentucky. The Herrin does not have a number in Indiana, where Coal VI is the younger Hymera Coal Member.

Figure 4-74. Graphic log of the Madison Coal Corp. No. 25 borehole from sec. 12, T 8 S, R 3 E, Williamson County, Illinois, the reference section for the Herrin Coal Member. © University of Illinois Board of Trustees.

Given its great economic importance, the Herrin Coal has been mapped more thoroughly than any other Pennsylvanian member in Illinois. Difficulties in identification arise chiefly on the eastern side of the basin, where the Herrin has been confused with the older Briar Hill and the younger Hymera Coal (Shelburn Formation). Locally, the Herrin and Hymera are less than 3 ft (1 m) apart. The Herrin is greatly thinned in several other areas, but generally, its position can be identified with reference to older and younger coal, black shale, and limestone members. 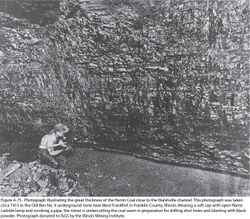 Figure 4-75. Photograph illustrating the great thickness of the Herrin Coal close to the Walshville channel. This photograph was taken circa 1915 in the Old Ben No. 9 underground mine near West Frankfort in Franklin County, Illinois. Wearing a soft cap with open-flame carbide lamp and smoking a pipe, the miner is undercutting the coal seam in preparation for drilling shot holes and blasting with black powder. Photograph donated to ISGS by the Illinois Mining Institute.

Many maps depict the thickness of the Herrin Coal. The most recent statewide map for Illinois is that of Treworgy et al. (2000), which does not differ greatly from the map of Treworgy and Bargh (1984). These sources show that the main area of thick Herrin Coal occupies nearly all of the Fairfield Basin and Western Shelf south of Springfield and Decatur. The coal thins markedly onto the La Salle Anticlinorium, the Salem Anticline, and the Loudon Anticline and a larger surrounding area. The Du Quoin Monocline, which markedly affected the Springfield Coal, had little effect on the thickness of the Herrin. Within this larger area, the thickest coal borders the Walshville channel (Figure 4-75). Here, the Herrin is thicker than 8 ft (2.4 m) in large areas and locally reaches 14 ft (4.2 m). Other areas of moderately thick Herrin Coal, generally 3.3 to 6.6 ft (1 to 2 m), include parts of Douglas, Champaign, and Vermilion Counties east of the La Salle Anticlinorium, erosional remnants west of the Illinois River, and areas of locally thicker deposition around Spring Valley, Streator, and Verona in northern Illinois. 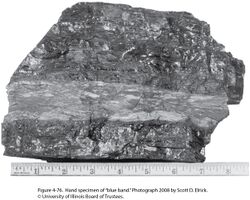 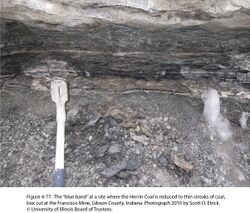 Figure 4-77. The “blue band” at a site where the Herrin Coal is reduced to thin streaks of coal, box cut at the Francisco Mine, Gibson County, Indiana. Photograph 2010 by Scott D. Elrick. © University of Illinois Board of Trustees.

Bright-banded coal having closely spaced cleat (vertical fractures) is characteristic. Partings, laminae, and lenses of fusain, claystone, and pyrite are numerous. By far the most extensive claystone layer in the Herrin or any Illinois Basin coal seam is the “blue band,” which is normally about 1 to 3 in. (2 to 8 cm) thick and occurs in the lower one-fourth to one-third of the seam (Figure 4-76). However, the blue band thickens markedly, to 3 ft (1 m) or more, near the margins of the Walshville channel. In addition, close to the Walshville channel the Herrin becomes shaly, grading to the upper part of the Walshville Member channel deposits. Larger wedge-shaped “splits” of mudstone, siltstone, and sandstone also are encountered near the channel. Even more remarkable, the blue band persists to the lateral margins of the Herrin Coal, and perhaps beyond. A photograph (Figure 4-77) shows the blue band in a surface mine in Gibson County, Indiana, where the Herrin Coal is reduced to streaks.


The sulfur content of the Herrin Coal is closely related to the roof rock lithology. Where the gray, nonmarine Energy Shale Member is thin or absent, the sulfur content is typically 3 to 5%, in common with most Illinois Basin coal. Where the Energy Shale is thicker than about 20 ft (6 m), the sulfur content dips below 2% and can be less than 1%. Evidently, the gray mud shielded the peat from sulfide ions in the marine water and sediment. The same association of thick, nonmarine gray shale with low-sulfur coal has been documented for the Murphysboro, Colchester, Springfield, and Danville Coals (Allgaier and Hopkins 1975; Treworgy and Jacobson 1985).


Coal balls (mineralized peat) are common wherever marine rocks overlie the Herrin. They are generally composed of limestone partly replaced by pyrite. Isolated coal balls mostly are found near the top of the member. Large masses of coal balls up to 100 ft (30 m) across and replacing the entire height of the coal have been encountered in several mines in southern Illinois and western Kentucky (Bauer and DeMaris 1982; DeMaris 2000). Such large masses of coal balls are more common in the Herrin than in any other widely mined coal unit. Claystone dikes are another hindrance to mining. These are numerous on the Western Shelf and in the Danville area where the Energy Shale is thin or absent.

Both contacts generally are sharp. Coal intertongues with shale near the top of the Walshville Member along the channel margins and with the basal Energy Shale in the form of “splits” and “rolls.”


A series of four articles alluded to a “ragged edge” of the Herrin Coal in western Kentucky and suggested that peat accumulated simultaneously with offshore deposition of the Brereton/Providence Limestone. Hower et al. (1987), de Wet et al. (1997), Hower and Williams (2001), and O’Keefe et al. (2008) described upper layers of the coal being truncated, disturbed, brecciated, oxidized, and, in some cases, intermixed with limestone and marine fossils. Aside from a single underground mine exposure in O’Keefe et al. (2008), these examples are all from drill cores and span several western Kentucky counties. Without viewing the cores and mine exposure in totality, the authors’ conclusions are difficult to assess. However, I have examined and mapped in underground mines “rolls” of Brereton Limestone accompanied by deformation, brecciation, and oxidation of the underlying Herrin Coal. In addition, I have encountered many “limestone bosses,” in which roughly spheroidal masses of the Brereton protrude downward into the Herrin Coal. Small-scale injection of limy sediment into the coal accompanies both types of structures (Nelson 1983b, p. 31–34). I suggest that the “ragged edge” features in Kentucky represent similar structures that formed after peat accumulation and during or shortly after Brereton deposition, before the peat and limy sediment were lithified. Another explanation is the erosion of peat and mixing with limy sediment during transgression, storms, or both.

Kosanke (1950) and Peppers (1970, 1996) discussed fossil spores of the Herrin and neighboring coal seams. Plant material preserved as mineralized peat (coal balls) also has been thoroughly investigated (e.g., Phillips et al. 1977; DiMichele and Phillips 1988; Phillips and DiMichele 1988; Winston 1988). Mahaffy (1985) described pollen and spores from the coal and from coal balls. A single example of a pectenoid pelecypod was found in a drill core from the “blue band” in western Kentucky. This find suggests brackish water during deposition of the claystone layer.

Based on palynology (Peppers 1996) and physical stratigraphy, the Herrin is correlative with the Lexington Coal in Missouri and the Mystic Coal in Iowa. A persistent claystone layer in the lower part of the Mystic and Lexington Coals probably corresponds to the “blue band.” In addition, the Herrin probably correlates with the Upper Kittanning coal bed of Ohio, West Virginia, and Pennsylvania, along with the Princess No. 7 coal bed of eastern Kentucky. The late Desmoinesian age corresponds to the Asturian (Westphalian D) or Cantabrian (early Stephanian) age of western Europe and to late Moscovian on the global timetable (Gradstein et al. 2012).

The Herrin and its correlatives (Lexington, Mystic, Upper Kittanning) represent one of the largest Pennsylvanian coastal peat deposits of North America (Greb et al. 2003). The “sweet spot” for peat accumulation was the lowland bordering the Walshville channel, a major river that flowed through the swamp. Several tectonic structures in Illinois were active, influencing peat thickness. The eastern basin margin (in Indiana) and a large area in central Illinois were topographically higher, so peat did not develop or was removed shortly after formation.


The lateral continuity of claystone layers in the Herrin, particularly the “blue band,” is remarkable. Clay mineralogy of the blue band rules out the origin as a volcanic ash deposit (Burger and Damberger 1985). The manner in which this layer thickens along the margin of the Walshville channel signifies that it probably originated during a marked but brief episode of flooding that temporarily drowned the peat swamp.

The Herrin Coal is the leading economic seam in Illinois and second to the Springfield Coal basin wide. According to Keystone (2010), the Herrin accounts for 78.8 billion tons (71.5 billion metric tons) of resources in Illinois, about 37% of total resources. Corresponding figures for Kentucky are 9.65 billion tons (8.75 billion metric tons) and 27% of total resources. The Herrin is too thin to mine in Indiana except in small areas along the state’s western border.