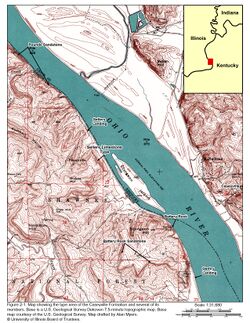 The coal was named for Gentry (or Gentry’s) Landing on the Ohio River in Hardin County, Illinois (Figure 2-1). Older versions of the Shawneetown 15-minute topographic map locate Gentry Landing south of Battery Rock in the NW¼ of sec. 35, T11S, R10E.

According to Kosanke et al. (1960), the stratotype resides just south of Battery Rock in SW¼, sec. 26, T11S, R10E, Hardin County. This section has not been described in print, and ISGS field notes for the area do not mention coal. However, Baxter et al. (1963, p. 25) reported that the coal is best exposed northwest of Battery Rock in the SW¼ NE¼ of sec. 27, in the same township where Worthen and Englemann (1866, p. 360–361) described the coal in some detail and fixed its stratigraphic position. Pending further field work in the area, the site identified by Baxter et al. (1963) is hereby considered the type locality. 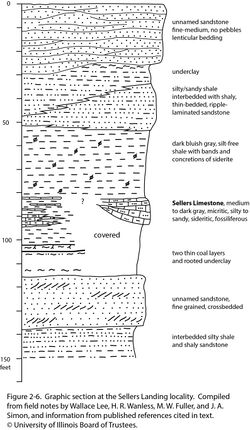