Difference between revisions of "Galatia Member"

Hopkins (1968) mapped a paleochannel that disrupts the Springfield Coal in southeastern Illinois and inferred that the channel partly coexisted with peat formation. Hopkins et al. (1979, p. 148) named this feature the Galatia channel. In an unpublished thesis, Ledvina (1988, p. 641) used the name “Galatia Sandstone Member” for “coarse channel fill and the coarse facies overlying shales and siltstones over the Springfield (No. 5) Coal.”

The name is derived from a town that overlies the channel in northwestern Saline County, Illinois. As Callary (2009, p. 130–131) writes, the community was in Gallatin County when it was founded in 1836: “The name was apparently to have been Gallatin, named for Gallatin County, but the final n was either smeared or mistaken for an a by a postal agent or county official. The word Gallatia was then changed to Galatia by someone familiar with the biblical references to Galatia, the [ancient] country in Asia Minor [now part of central Turkey].”

Logs of Kerr-McGee #7629-16, including the core description and the gamma-ray–neutron log, are on file at ISGS Geological Records Unit and are available via the ISGS website. Core is archived at the ISGS Geological Samples Library in Champaign (storage number C-14933).


Channels filled with the Galatia Member are of distinctly different ages. Some were abandoned and filled before the Springfield peat began to develop. The main Galatia channel is younger and persisted during Springfield peat formation. The Leslie Cemetery channel in Indiana coexisted with peat formation, but it follows the course of an older, abandoned channel. The Terre Haute channel of Friedman (1956) appears to be similar to the Galatia channel but is not known to connect. 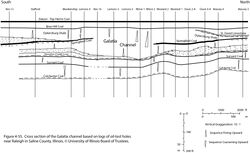 Figure 4-55. Cross section of the Galatia channel based on logs of oil-test holes near Raleigh in Saline County, Illinois. © University of Illinois Board of Trustees.

“Maps by Potter (1962, 1963), published before the Galatia channel was recognized, portray the thickness of sandstone between the Springfield and Houchin Creek Coals. The sandstone that Potter mapped is largely the Galatia Member of this report. Potter’s 1962 map covers southeastern Illinois at a scale of about 1:250,000, whereas his 1963 map includes parts of Indiana and Kentucky at a smaller scale. An independently prepared map by Wanless et al. (1970, figure 6) shows a closely similar pattern of sandstone distribution. In addition, Hopkins (1968, plate 2) published two cross sections of the Galatia channel” (Nelson et al. 2020). The cross section presented here (Figure 4-55) shows the same relationships.


“Maps portray elongate bodies of sandstone having looping, arcuate boundaries and forming a dendritic pattern. Cross sections illustrate broad sand-filled channels or valleys that were eroded from near the top of the Delafield Member. These valleys have steep sides and broad, nearly flat bottoms” (Nelson et al. 2020) that rest upon or just above the Excello Shale and Houchin Creek Coal. Evidently, black shale and coal (peat) were more resistant to erosion than the Delafield Member. Locally, the Galatia channel truncates the Houchin Creek, and it may cut out the Survant Coal. The overall pattern evokes a series of actively meandering, laterally migrating fluvial channels that operated during the time of underclay (paleosol) development.


The thickness of the Galatia Member is commonly 65 to 100 ft (20 to 30 m), thinning rapidly to zero along channel margins.

“The Galatia Member is an upward-fining succession, commonly 65 to 100 ft (20 to 30 m) thick. The lower part is dominantly sandstone. As seen in cores, the sandstone is very fine to fine grained, locally medium grained, overall fining upward. Cross-bedding in the lower part gives way upward to rippled, wavy, and contorted or slumped laminations. Layers of shale–pebble conglomerate occur in the lower part. Also present are siderite pebbles and fragments and stringers of coal. Upper channel filling consists of laminated to massive siltstone and silty shale or mudstone containing carbonaceous flakes and scattered plant fragments. Several cores showed rhythmic lamination, with probable neap–spring tidal cycles, near the top of the member. The uppermost part of the Galatia Member, lateral to the Springfield Coal, is largely dark, carbonaceous shale and claystone containing numerous ragged layers and stringers of coal.” (Nelson et al. 2020).

“The lower contact is erosive, cutting into the Delafield Member and locally into older units, including the Houchin Creek Coal. This erosive basal contact is readily apparent in cores and in most geophysical logs. The upper contact with the Dykersburg Shale is at least locally erosive, as shown by drill cores and underground exposures in the now-abandoned Galatia Mine. Because upper Galatia and Dykersburg Members contain similar rock types, this contact can be difficult to pick in well logs. Lacking lithologic evidence, the contact may be mapped at the elevation of the top of the coal adjacent to the channel.” (Nelson et al. 2020).

The age is slightly older than and partly contemporaneous with the Springfield Coal.

“Maps and sections portray a series of actively meandering, laterally migrating fluvial channels. Superimposed onto Potter’s [1962] map of sandstone thickness, the Galatia channel of Hopkins (1968) coincides with a large, southwest-trending sandstone meander belt. Therefore, this meander belt appears to have been a direct precursor to the Galatia channel that flowed through the Springfield peat swamp. The Galatia precursor channel is the work of a river that flowed across the emerging coastal plain prior to peat accumulation. Eroding soft sediments on a low gradient, this river freely meandered and carried a large sediment load, derived partly from upland sources and partly from recycling its own banks and bed. A broad, sandy meander belt was rapidly established. Through time, the valley aggraded and stream energy declined, reducing the sediment load. Tidal influence became evident in the late stage of channel filling.” (Nelson et al. 2020).

The Galatia channel is economically significant in an indirect fashion because it controlled the distribution, thickness, and quality of the Springfield Coal.