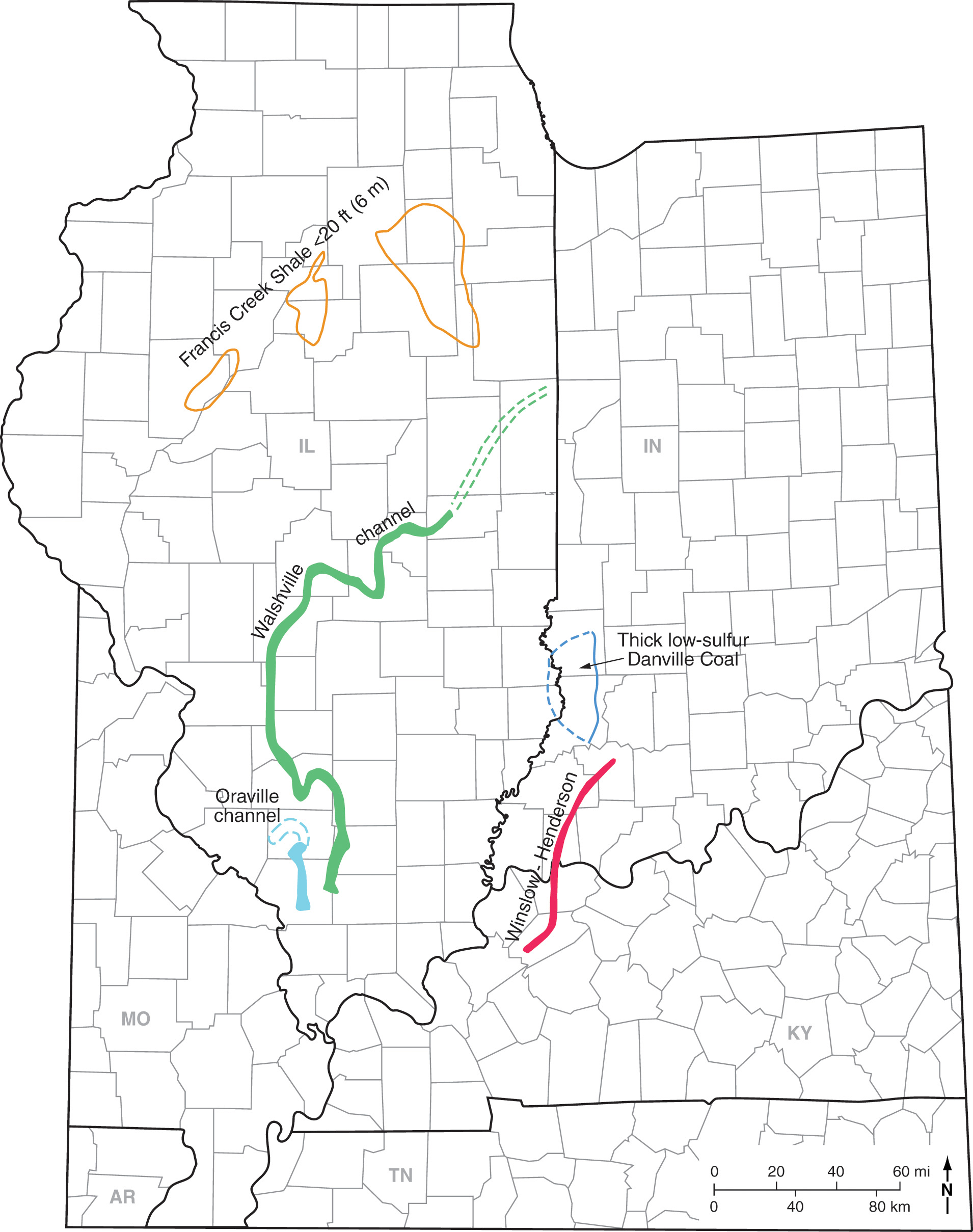 ). The Galatia channel provides an apt model for comparison.

The Colchester Coal may be the most extensive coal bed in North America, if not the world (Wanless 1975; Greb et al. 2003). It correlates with the Lower Kittanning coal bed of the northern Appalachians and the Croweburg Coal of the Western Interior. Cecil et al. (2003) characterized time-equivalent rocks throughout the continental United States.

In most of the Illinois Basin, the Colchester is too thin to mine (1.6 ft [≤0.5 m]) and is directly overlain by the black, phosphatic Mecca Quarry Shale, with the marine Oak Grove Limestone above that (Figure 40). In northern Illinois, the coal thickens to as much as 4.6 ft (1.4 m) and is overlain by the gray Francis Creek Shale, which ranges up to 111.5 (34 m) thick (Figure 41). Low-sulfur Colchester Coal is known from only two mines among the hundreds that formerly worked this seam. These mines had thick Francis Creek; however, many other mines having thick Francis Creek had high-sulfur coal (Gluskoter and Hopkins 1970).

The Francis Creek and Dykersburg Shales are closely similar in some respects,and different in others. Both units encapsulate upright tree stumps and display beautifully developed tidal rhythmites (Kuecher et al. 1990; Baird 1997). The Francis Creek shows a more consistent upward-coarsening profile than the Dykersburg. The upper part includes rooted zones, impure coal, channel-form sandstone bodies, and features interpreted as crevasse splays and natural levees (Baird 1997). Most notably, the Francis Creek bears the famous Mazon Creek fossils, preserved in siderite concretions. These include a remarkable fauna of soft-bodied organisms, some known nowhere else (Shabica and Hay 1997), along with a rich and diverse flora of land plants (Wittry 1996). These fossils have been divided into a “Braidwood assemblage” representing fresh to slightly brackish, tidally influenced water and an “Essex assemblage” of more saline, but not fully marine conditions (Baird 1997). The Braidwood assemblage and thickest Francis Creek Shale are localized near the northeastern margin of the basin. The Dykersburg lacks a significant invertebrate fauna, and a marine to brackish transition has yet to be defined.

All these features point to extremely rapid sedimentation, at least locally. By counting tidal cycles and measuring their thickness, Kuecher et al. (1990) determined rates as rapid as 3.3 ft (1 m) per year.

No “split” Colchester Coal or channels contemporaneous with the coal have been identified. However, patterns of Francis Creek Shale distribution and enclosed biota suggest that river mouths lay a short distance northeast of the present Colchester outcrop (Baird et al. 1985).

As with the Dykersburg Shale, early models placed the Francis Creek in a deltaic setting (Wright 1965; Shabica 1970). Later authors recognized an estuarine component and favored deposition during transgression of the peat-forming lowland (Baird et al. 1985a,b). Archer and Kvale (1993) and Archer et al. (1995) further emphasized the tidal, estuarine aspect. We regard the Francis Creek as a series of tidally dominated deltas that accumulated in a broad, brackish embayment.

The gray, nonmarine Energy Shale and Walshville channel (Figures 42 and 43) are close analogues of the Dykersburg Shale and Galatia channel. Belts of thick Herrin Coal (6.6 to locally more than 13.1 ft [2 to 4 m]) flank the channel, and shaly or “split” coal flanks channel margins. Away from the channel, the Herrin has a black shale–limestone roof and uniformly high sulfur content. Near the channel, wedges of the gray Energy Shale intervene between coal and black shale. The sulfur content of the coal is moderate to low (0.5 to 2.5%) where the Energy Shale is thicker than about 19.7 ft (6 m; Johnson 1972; Allgaier and Hopkins 1975; Treworgy and Bargh 1984; Nelson et al. 1987).

The Energy Shale consists of gray mudstone, siltstone, and sandstone as thick as 121.4 ft (37 m). It is thickest and coarsest near the channel, becoming thin and lenticular at its outer limits. The sparse fauna comprises brackish-water forms such as Lingula, Dunbarella, Myalina, the brachiopod Leaia tricarinata, and rare cephalopods and eurypterids. Fossil land plants are abundant and well preserved, including stands of upright stumps (mainly lycopsids) rooted at the top of the coal (DiMichele and DeMaris 1987; DiMichele et al. 2007). Locally, the Energy Shale contains siderite concretions, similar to those of Mazon Creek, containing fossils of plants and soft-bodied invertebrates (Gastaldo 1977; Baird et al. 1985). Shared with the Dykersburg are features including tidal rhythmites (Archer and Kvale 1993; DiMichele et al. 2007), a variety of rolls (Edwards et al. 1979; Krausse et al. 1979; Bauer and DeMaris 1982; Nelson 1983), and a major coal disruption that suggests large-scale rafting of peat (Nelson 1983, p. 21–23). Away from the Walshville channel, the Energy Shale is eroded into pods beneath the black, fissile, marine Anna Shale. The Anna–Energy contact is clearly erosional, having locally more than 16.4 ft (5 m) of relief with bedding of the Energy Shale truncated at a 20-degree angle. Finally, the Anna and overlying marine Brereton Limestone onlap and pinch out against the tidally deposited, gray siltstone and sandstones that fill the core of the Walshville channel (Bauer and DeMaris 1982; DeMaris et al. 1983; DeMaris 2000). The Turner Mine Shale and St. David Limestone pinch out in similar fashion where the Dykersburg Member is thick.

Authors through the 1980s attributed the Energy Shale, like the Dykersburg, to crevasse splays and related environments in a river-dominated deltaic setting similar to the modern Mississippi (Johnson 1972; Allgaier and Hopkins 1975; Nelson 1983; Palmer et al. 1985; Treworgy and Jacobson 1985; Burk et al. 1987). Archer and Kvale (1993) pointed out flaws in this model, including the absence of natural levees, the absence of unequivocal evidence for crevasse splays, and the presence of a strong tidal signature. Their model calls for a mud-dominated, tropical estuary or tidal delta having a small to moderate tidal range.

The Baker Coal constitutes an important economic seam in the southeastern part of the Illinois Basin. The following is a summary of information we have assembled from mine and borehole data. A longer report on the Baker Coal is in preparation.

Glenn (1912) named the Baker Coal for the Baker Mine in Webster County, Kentucky. Kosanke et al. (1960) gave the name Allenby Coal Member to a thin seam in southeastern Illinois. In southern Indiana, geologists used the informal name Lower Millersburg coal. Our subsurface cross sections (unpublished) demonstrate that the Baker, Allenby, and Lower Millersburg coals are the same bed. Because Baker was the first name to be used formally, we are using Baker Coal in this report.

Like the Galatia channel, the Winslow–Henderson comprises a broad, deeply incised valley that was filled largely with sand prior to peat development and a younger, narrower segment that was filled with finer grained sediments during the time of Baker peat formation (Figure 45). Borehole data and exposures in surface mines show that the channel cut downward from above the Bankston Fork (upper Providence) Limestone, a short distance beneath the Baker Coal. The channel carved a valley 1.9 to 8.1 mi (3 to 13 km) wide and as deep as 196.9 ft (60 m), removing units as old as the Springfield Coal. Sandstone of the lower valley-fill displays large-scale lateral accretion on mine highwalls, signifying a meandering system. Sandstone grades upward to finer grained, heterolithic strata that bear tidal rhythmites. Approaching the Winslow–Henderson channel, the Baker Coal thickens to 9.8 ft (3 m) or more, and it has multiple laminae and thin interbeds of carbonaceous claystone. The Baker is absent or reduced to stringers within a meandering belt that varies from about 0.9 to 3.1 mi (1.5 to 5 km) wide.

The principal difference between the Springfield and the Baker is that the latter lacks marine roof strata and has no gray shale wedge analogous to the Dykersburg. Covering the Baker is a succession of fluvial and floodplain deposits, including mudstone, thin lenticular sandstone, thin coal, and paleosols. Lenses of gray shale a few feet (meters) thick bear fossil plants, including upright tree stumps. Brackish to marine strata did not appear until after the next younger major peat deposit, the Danville Coal. These observations suggest that (1) preserved Baker Coal developed farther up the coastal plain than did preserved Springfield Coal, or (2) the sea level did not rise much following Baker peat accumulation.

The Danville (Figures 2 and 40) is the next major coal bed above the Baker. It is the youngest widespread, economically important seam in the Illinois Basin. The Danville is thin and rather patchy in western Illinois, reaching 3.3 ft (1 m) thick in small areas. Coal thick enough to mine (generally 3.9 to 5.9 ft [1.2 to 1.8 m] thick) is largely confined to a belt running north-northwest along the east side of the basin from Gibson County, Indiana, into northern Illinois. Coal-thickness patterns (Korose et al. 2002) indicate that much of the thickest coal has been eroded east of the present outcrop. Most Danville Coal has a high sulfur content, but low-sulfur (locally <0.5%) coal occurs in Knox and Sullivan Counties, Indiana, and in the bordering part of eastern Illinois (Harper and Eggert 1995; Harper 1998; Korose et al. 2002).

Overlying the Danville is a complex succession of gray clastic rocks that thickens from less than 3.3 ft (1 m) in parts of western Illinois to as much as 229.7 ft (70 m) in the central Fairfield Basin of southeastern Illinois. Where it is thin, the shale is dark colored and, in places, is black, fissile shale similar to the Excello and Turner Mine Shales. Eastward, the interval changes to gray mudstone, siltstone, and sandstone arranged in multiple upward-coarsening cycles. The coarsest facies occur in Knox County, Indiana, coinciding with the only known area of low-sulfur Danville Coal. Abundant fossil plants, tree stumps in growth position, and tidal rhythmites are much in evidence in underground mines here. Rolls are also common, as are wedge-shaped siltstone splits and a large-scale coal-seam disruption that probably involved peat rafting (Figure 46). However, no channels contemporaneous with the Danville have been encountered.

Evidently, Knox County lay near the mouth of a large estuary that discharged sediment onto the Danville peat from the east. Rapid burial under freshwater to slightly brackish conditions resulted in low-sulfur coal. Tidal currents agitated the peat near the estuary mouth, whereas deeper in the basin, the peat was quietly buried under fine mud.

The Murphysboro Coal, in the upper Tradewater Formation, presents some similarities to the Colchester, Springfield, Herrin, and Danville Coals in that thick, low-sulfur coal is associated with a gray shale “wedge” and a contemporaneous channel. However, the Murphysboro is highly lenticular and has been less thoroughly studied than the other examples, so the relationship of coal to gray shale and the channel is not completely understood.

Jacobson (1983) documented that thick, low-sulfur Murphysboro Coal in southwestern Illinois flanks a feature that he named the Oraville channel (Figures 39 and 47). In fact, coal of mineable thickness (up to 8.2 ft [2.5 m]) is confined to a small area near the channel. Sulfur content is low to moderate (1 to 2.5%) near the channel where thick, nonmarine gray mudstone (unnamed) overlies the coal. Elsewhere, the coal is topped by marine black shale and limestone, and its sulfur content is greater than 3% (Jacobson 1983). Away from the Oraville channel, the Murphysboro has a highly patchy distribution (Treworgy and Bargh 1984). Only small, isolated areas of thick coal are known. Little significant mining has taken place away from the channel.

The Murphysboro undergoes dramatic splitting near the Oraville channel margins, where underclay is absent or weakly developed (Figure 48). Upright lycopsid tree stumps are common above the lower coal bench. The gray mudstone exhibits tidal rhythmites and bears a prolific, well-preserved flora dominated by Macroneuropteris scheuchzeri, a plant believed to have been tolerant of coastal, perhaps brackish-water, conditions (Falcon-Lang 2009). The Oraville channel follows the downthrown side of a monocline that was active during deposition of the Murphysboro Coal (Nelson et al. 2011).

Ostensibly, the Oraville is another fluvial channel that became an estuary, like the Galatia and Walshville channels. However, nothing is known of the presumed fluvial “precursor” channel, and the nature of “splitting” coal is poorly understood. Further study of the Murphysboro is required to integrate this unit into a general model.