Allgaier and Hopkins (1975, p. 7–8) wrote, “In the ‘Quality Circle’ mining area of Jefferson and Franklin Counties, where thick, low-sulfur Herrin Coal is being mined, a gray silty shale ranging in thickness from about 20 feet to about 100 feet [6 to 30 m] lies immediately above the Herrin Coal and below the Anna Shale and the Brereton Limestone. . . . The gray shale is here named the Energy Shale Member of the Carbondale Formation.”

The town of Energy in Williamson County, Illinois, is the source of the name. Callary (2009, p. 113) explained, “[The town was] founded about 1904 as Fordville by Wiley Ford of Herrin. The Taylor Coal Company commenced operations in Fordville in 1909 and in 1913 requested that the name be changed to Energy, the company’s trademark, so that Energy coal could be shipped from Energy, Illinois.”

Authors dating back to Shaw and Savage (1912) noted the occurrence of thick gray shale above the Herrin Coal in parts of southern Illinois. Allgaier and Hopkins (1975) were first to apply a formal name to this rock.

The pit is flooded and the surrounding area is densely vegetated. It is unlikely that rock exposures remain. 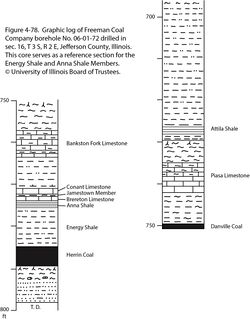 The Energy Shale lies directly above the Herrin Coal and beneath the Anna Shale and Brereton Limestone Members (Figure 4-78). Where the Energy Shale is thick, the Anna, Brereton, and younger members up to at least the Bankston Fork Limestone commonly pinch out. The Energy Shale is a direct analogue to the Francis Creek and Dykersburg Shale Members overlying the older Colchester and Springfield Coals, respectively. 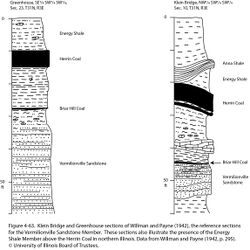 Several authors have published generalized maps showing the distribution of the Energy Shale, but little revision has taken place since Treworgy and Jacobson (1985). Thick Energy Shale occupies lobate areas that border the Walshville channel, where clastic deposits of the Walshville Member interrupt the Herrin Coal. The four largest areas of thick Energy are (1) the “Quality Circle” that covers parts of Franklin, Jefferson, Perry, and Williamson Counties, (2) the “Troy area” mainly in Madison and St. Clair Counties, (3) the “Hornsby area” in Christian, Macoupin, and Montgomery Counties, and (4) a large unnamed area in east-central Illinois. In each of these areas, the shale thickens from zero at the outer margins to 80 ft (24 m) or more in the interior. The Energy may exceed 110 ft (33 m) in the Quality Circle. Surrounding these bodies of thick Energy Shale are larger areas where the shale occurs as isolated lenses, which range upward from a few feet (~1 m) thick and a few tens of feet (~10 m) across. A map in Nelson et al. (1987, figure 2) shows the approximate extent of lenticular Energy Shale.


The Energy Shale also is present near Streator in LaSalle and Livingston Counties, northern Illinois. Willman and Payne (1942, p. 132–134) described gray, silty to sandy shale (Unit 52) as thick as 60 ft (18 m), overlain in places by sandstone (Unit 53) as thick as 20 ft (6 m). These strata directly overlie the Herrin Coal and are below the black shale of Unit 55 (undoubtedly Anna Shale) and the Brereton Limestone. In some outcrops, the gray shale occurs as lenses between the Anna Shale and coal (Figure 4-63).

The most prevalent rock type is medium gray, silty mudstone to siltstone that is weakly to moderately fissile, faintly laminated to massive, and contains numerous nodules and bands of siderite. Close to the Walshville channel where the Energy Shale is thick, a coarser facies that includes fine-grained shaly sandstone is commonly present. Both upward-fining and upward-coarsening sequences are shown. Lamination can be planar to wavy, rippled, flaser, and cross style, along with slumped lamination. In places, the shale exhibits well-developed tidal rhythmites (Archer and Kvale 1993; DiMichele et al. 2007).


At some localities, a darker gray, finer grained, distinctly laminated facies of the Energy Shale underlies the normal lighter gray, silty shale. The contact between dark and light facies may be sharp or gradational. The dark facies has been observed in mines both in the Quality Circle (Krausse et al. 1979) and near Danville. In addition, the dark gray variety occurs where the shale occurs as isolated lenses distal to the Walshville channel.


Large (to several hundred meters across) bodies of strongly deformed Energy Shale have been encountered in the roofs of underground mines in Jefferson County. These clearly represent some form of gravity-driven deformation that took place before the sediments were lithified. Nelson and Ledvina (1985) likened these features to mudlump islands in the modern Mississippi delta. 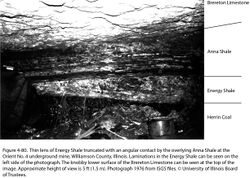 The contact to the Herrin Coal below is normally sharp or rapidly gradational through an interval of an inch or two (3 to 5 cm). However, ragged intertonguing between coal and shale has been observed in numerous mines. Specifically, intertonguing takes place along the margins of features commonly called “rolls.” In map view, rolls are linear to sinuous and commonly occur in parallel sets or swarms. The width is several feet to tens of feet (~1 to 10 m) and the length can be hundreds of feet (100 m or more). In cross section, a roll is a lens-shaped body of shale protruding downward into the coal (Edwards et al. 1979; Krausse et al. 1979; Bauer and DeMaris 1982; Nelson 1983b). Several theories of origin have been presented, but most rolls probably were formed by water currents such as tidal channels that scoured the peat.


The contact between the Anna and Energy Shale is typically sharp, and in some mines on the margins of the Quality Circle, this contact is strongly erosive (Figures 4-79 and 4-80). I have seen cases in which the Anna truncates Energy bedding at a 20-degree angle, and the Energy is cut down from 20 ft (6 m) thick to zero within a lateral distance of 100 ft (30 m). Bauer and DeMaris (1982) documented such erosion at a mine on the east side of the Quality Circle. The isolated pods or lenses of Energy Shale that overlie the Herrin appear to be erosional remnants of a once continuous thicker deposit.

Typical for gray shale, siltstone, and sandstone. The Energy Shale strongly contrasts with coal, Anna Shale, and limestone on most types of logs.

Plant fossils are locally abundant and beautifully preserved in thick Energy Shale near the Walshville channel. Large intact fronds of “fern” foliage and giant prone fossil logs are concentrated near the base of the shale. Also common are groves of fossil tree stumps that are rooted at the top of the coal and standing in growth position (DiMichele and DeMaris 1987). DiMichele et al. (2007) documented a “spectacular fossil forest” in the roofs of two mines near Danville.


Invertebrate fossils are far less common and conspicuous, and only a few forms are represented. Perhaps the most common is the branchiopod Leaia tricarinata. Others include linguloid brachiopods, pectenoid and mytiloid pelecypods, and rare cephalopods and eurypterids (Palmer et al. 1985).


Soft-bodied organisms locally are preserved in siderite concretions of the Energy Shale in similar manner to Mazon Creek fossils from the Francis Creek Shale. A site near Georgetown in Vermilion County, Illinois, yielded plants, shark egg capsules, Leaia, horseshoe crabs, shrimp, nonmarine bivalves, and rare insects (Baird et al. 1985a). Another locality in abandoned strip mines near Carterville in Williamson County, Illinois, has yielded plant fossils from siderite nodules (Gastaldo 1977; Jennings and Millay3 1978). Joseph A. Devera of the ISGS has collected horseshoe crabs, insects, a spider, and a scorpion from the same locality.

The flora of the Energy Shale does not tightly constrain age, which is far better defined by reference to the enclosing Herrin Coal and Anna Shale.

As with the Dykersburg Shale, authors in the 1970s and 1980s (e.g., Burk et al. 1987) invoked crevasse splays that developed when the Walshville channel broke through natural levees and inundated bordering peat marshes. The lobate regional pattern of thick Energy Shale bodies does resemble modern crevasse splays of the Mississippi delta, but here the resemblance ends. No evidence for natural levees has been found, and Energy Shale is nearly an order of magnitude thicker than modern deltaic crevasse splays—which open into bays, not marshes.


Sedimentology and fossils point to a tidally influenced, fresh- to brackish-water setting. The preservation of delicate foliage, soft-bodied organisms, and upright stumps demands very rapid sedimentation. The most plausible setting is a broad estuary that developed during the initial stages of the marine transgression that drowned the Herrin coal swamp (Archer and Kvale 1993).

Shale from this unit was mined near Streator, Illinois, during the early 20th century for the manufacture of clay products. Otherwise, the economic impact of the Energy Shale is indirect, through its relationship to low-sulfur Herrin Coal. As a mine roof, the shale is weakly to moderately competent and tends to be sensitive to moisture.

3Jennings and Millay attributed these fossils to the Anna Shale Member, but that is improbable because the Anna does not contain siderite nodules.